Another beautiful week of weather and lots and lots of golf.  I mentioned last week about a couple of signs of spring arriving and this week saw another sign that I look for and that is a Jacaranda tree that I pass regularly has started to flower.  I checked last years date and it was identical so we are possibly about the same as last year.  I know in the USA Superintendents are very big on aligning their maintenance programmes around what is happening elsewhere in nature and I have tried a bit myself over time, hence watching the flowering patterns of some plants.  The odd thing about that is that we have a Jacaranda in our front yard less than 200 metres from the aforementioned one and it is always at least four weeks behind.

As mentioned a few posts back we bought a temporary green into play on 1R this week while we prepare for the removal of the foreign grass invasion into the greens surface.  This is the first of potentially three applications to ensure that we get a kill.  We need to close the green to play to prevent the chemical being moved on to the greens surface by foot traffic and the first application is the most important and done at the highest rate while all the grass is actively growing.    The sprayed out areas will be cored and then the green will be renovated and the renovated material will be placed in the cored areas of the dead zones to re-generate and cover in.  This will be done on Wednesday October 14 and the temporary green will be in play for at least four weeks while the turf establishes.  The lower photo shows an area on the bottom left of the collar that was sprayed out where we will trial a different collar grass to see if it is less invasive than the normal Couchgrass we use.

The West course will be closed from 7am on Monday for two days which will allow us to do a mini renovation on the greens.  It is planned to solid tine aerate the greens at least three times over the two days to allow for some very important air exchange and also to help soften the surface which can happen following a aeration program.  It's a process that we just don't have time to do while working around play and is normally done on a rainy day when no one is playing.  While the West is closed we will take the opportunity to renovate the West course tees as well.

And while we bask in the sun up here relatively free from Covid restrictions spare a thought for Victorians.  This is the main street in Ballarat today!!  Golf is still allowed in regional Victoria and apparently there were still some players out today!! 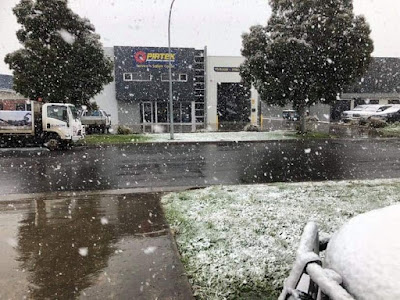 Posted by Peter Lonergan at 5:26 PM No comments:

A beautiful week of weather and maybe spring has now sprung?  On Tuesday we had a very sleepy Carpet Python crossing 13R fairway and several bee swarms as well as the return of the Rainbow Bee Eaters to the courses, which are all good signs of spring.  Some of the grass is also starting to move which is not before time as with the amount of cart traffic and play we are experiencing some areas are just plain worn out.  The seed head is starting to show on some of the different Couch varieties around the courses which is also a sign of warmer temperatures.  Fortunately we have had better rainfall this year which helps enormously with the turf's resilience.  The past two years we had around 230mm of rain falling between May and August compared to 425 this year and most forecasts are for a wet summer so we will wait and see on that one.

A productive week on the courses with the River greens de-thatched and double mown on Tuesday which as I have mentioned before is quite a rarity for us to achieve, within our maintenance time frames.  We also started on some tree root removal in some fairways and will continue that in the coming weeks.  The tractor mounted root pruner will also make an appearance over the coming weeks down the sides of fairways.

The world of golf's eyes are pretty much firmly on the US Open at Winged Foot and as always there is much talk about the course.  I haven't seen any first round coverage yet but people seem to be upset that the scores were so low.  It was apparently quite soft and calm and with the shortened daylight hours at this time of year they were probably concerned about players finishing.  They are estimating that 90% of the course prep work will take place in the dark which they are well set up for with mobile light towers and obviously all machinery having lights.  The normal crew of 55 will be bolstered by 85 volunteers which is amazing that so many were allowed given Covid.  And speaking of lots of people, apparently there will be up to twelve marshals on each hole basically acting as fore-caddies to prevent lost balls.

Kudos to the crew though as the early photos I have seen has the course looking pristine.  The course was completely overhauled between 2016 and 2018 and the focus since that finished was June 2020 for the US Open.  Earlier this year thanks to Covid, that became September 2020 and threw up a major curve ball as it is the end of summer and it is a cool season turfgrass course, so they had to keep the grass totally pristine throughout a full summer, which is no mean feat.  Don't get me wrong, Winged Foot is always pristine, but to maintain US Open level pristine, including five inch long rough throughout a summer, is phenomenal.

A lot of the restoration work focused on the greens which are, and always have been, treacherous.  All bunkers and tees were re-built and several holes were lengthened.  Most of the play lines are as they were as can be seen at 18 tee below.  The photo at the top is Jim Furyk on 18 tee in 2006 and below is 18 tee for this year.  Pretty tight lines??!!

22mm in the rain event yesterday and hardly a drop ran off which was very welcome as we were getting quite dry again and the pump situation hasn't been helping.  It has been a very dry August and September period although the water table is still holding up which is evidenced by the dams at 7 / 8 West still holding a good amount of water.  The 22mm takes us over two metres of rainfall for the year with three months to go.  Rainfall records for the Tweed Heads site have been kept since 1886 and in the 134 years there have only been 30 years when over two metres has been recorded with eight of those happening since 2006.

Back to the pump station and a couple of repairs this week have us pumping at about 80% and with a new manifold delivered today and hopefully installed early next week we should be back to full capacity which will be nice.  It was a good week on the repair side as well with no pipe blow outs and just a couple of niggly little problems in the satellite control boxes.

We were able to get the greens on both courses de-thatched today which is quite rare to get that done in one day.  The forecast rain obviously put a few people off and we were able to take full advantage.  We also started to de-thatch the West collars today which is the area immediately around the green.  The constant edging and work done to the greens means that the green surface level can fall below the collar and create what us turfies call a "well'' effect.  So we will be starting to de-thatch the collars more often to try and combat this issue.

I was watching some old golf tapes last week and came across this promo from the 1998 Victorian Open and Golf Australia had their own show with none other than Cool Tweeds Nicole Lowien as host.  I must say I don't remember the show but it just shows how far golf has fallen down in the ''must watch'' stakes.  Hopefully the boom that is currently being experienced in golf around the world will lift the games profile back up somewhere near where it was.  That 1998 Vic Open was played at Victoria GC in Melbourne and the crowds were absolutely huge and it was played without any big names apart from the leading Australians of the day.  Incidently it was won by West Australian Brad King who was a looong hitter in those days....wonder whatever happened to him?

Posted by Peter Lonergan at 5:44 PM No comments:

Another frustrating week in the pump shed after a very optimistic start on Monday when the foot valve (arrow to it below) was pulled out.  Upon inspection there was considerable corrosion along one of the welds and several small holes were evident which pointed to where the air was getting in.  The rubber gasket was also badly worn which would not have helped.  We replaced the foot valve and re-connected and after pressurising the system we still had air affecting the flow rate of the pumps.  It is still spasmodic and affects different pumps so is extremely difficult to find.  Two new components are being fabricated at the moment for installation next week to hopefully solve the problem.  It is still affecting our capacity to irrigate as the pumps will sometimes shutdown mid cycle and therefore no water gets to the courses so obviously the greens are the first priority.


The fluctuation of pressure throughout the courses is also wreaking havoc with the pipework and we had five ''major'' irrigation repairs that were done on Thursday.  There is already another one ready to go on Monday near 9W green.

The course closure on Tuesday this week gave us the opportunity to de-thatch and sand the River greens and the closure on Friday afternoon allowed us to get the greens double cut and rolled which is a very rare occurrence for us.  The early morning tee times and speed of the first groups makes it very difficult for us to get that amount of work done in front of play.  Unfortunately the wind has dropped a lot of tree debris around the place but other than that the River course is good to go for rounds three and four this weekend.
We have had a kangaroo out on the courses over the past couple of weeks and it has now invited a mate along for the hop!!  I have seen a wallaby on the courses a few times before but this is certainly a new one.  Hopefully they won't start breeding and take up residence as they can become quite a nuisance both with their droppings and potential aggressiveness towards golfers.
Posted by Peter Lonergan at 6:03 PM No comments: