It seems like every week is described as huge but that just seems to be the way it has been over the past eight weeks while the West greens project has been rolling along.  Throw the River greens renovations in this week as well and it really has been a huge week and a long one for the grounds staff.  I can assure you that renovations aren't done for fun as they mean long tiring days getting as much done as possible whilst the course is closed and the added burden of new greens and planting 2 more greens this week topped it off.

Over the past two years when nine of the former West bentgrass greens weren't renovated as they were about to be dug up, it has really demonstrated the need for greens renovation.  Both years as the temperatures rose the greens stressed earlier than they normally would have and this was most obvious last year when nine greens were renovated and nine weren't.  To be honest it even surprised me just how much difference the renovation made to the greens and their health through early summer.

The River reno's this year were done on a particularly unfriendly day with constant scuds of rain lashing across the courses accompanied by an equally lashing wind.  For reno's to be successful you need dry conditions which was certainly what we didn't get.  The greens have come up very well though and actually received their first mow today so recovery should be rapid.

As mentioned above the greens project continued along with 4 and 8W being planted and 9W having all the base sand installed.  The top sand was supposed to go in today but at 2pm on Thursday I learned that the power was to be shut off to the pump station for six hours from 9am on Friday and so we wouldn't be able to water the new sand in.  I also had the issue of two brand new greens that require constant water to keep them cool and alive so the worry levels were at extreme.  Fortunately the two greens have dam water close by so two fire fighter pumps were sourced and readied for action.  9am passed and for whatever reason the power didn't go off which was a relief as the water in the dams is associated with the groundwater and salt levels can be high.

The long hours on the course meant I didn't get to see too much of day one or two of the Australian Open at The Australian in Sydney these last couple of days.  I did get to see a few highlights on the TV last night and have read Jason Day's glowing comments about the condition of the course which rightly so is quite amazing.  Over the past eight weeks while I have been organising the West greens project, River greens renovation and normal routine maintenance of the 36 holes I have never had more than 17 bodies in the lunchroom on any given day.  Indeed there have been several occasions where there has only been 13 which was the case last Monday for the start of the River reno's when several staff were absent for a range of personal situations.  What I would give for the number of bodies in the photo below to be in the lunchroom at the one time.  Might be a bit crowded though???   It also demonstrates just how committed the Cool Tweed crew are when it comes to getting the job done.

Posted by Peter Lonergan at 6:03 PM No comments:

And then there was one!!  We are now on to the last green with the irrigation going in to 9W today.  The River greens renovations will delay the sand delivery in to 9 which should now happen next Thursday and Friday with the green being planted the following Tuesday.  4 and 8W are due to be planted next Wednesday and Friday respectively.

Elsewhere on the Club website is some information from VC Phil about an interruption to our water supply from Banora Point Wastewater plant which certainly put a spanner in the works this week.  Fortunately temperatures have still been down and we had some good rain last week that had the courses well prepared for the hiccup.  Having 2 three day old greens when I found out wasn't exactly the news I was hoping for but some judicious usage and skilled hand application by the crew had us survive the week.  I was given the go ahead to start pumping again on Thursday but waited another 24 hours.  The water is safe and is well below the regulated EPA parameters that we and the Council adhere to.


I love old photos of golf courses and golfers but this one of German POW's being used to rebuild a bunker tickled my fancy!! 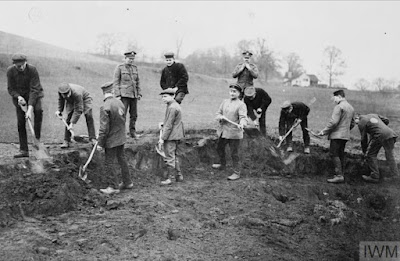 Another huge week on the West greens project with 4W only requiring the top layer of growing medium added and 8W excavated out.  4W certainly unearthed some nasty looking material which wasn't all that surprising as it has been one of the toughest greens to maintain, particularly as a bentgrass green.  That is one huge advantage that we now have is that the greens are very consistent with little difference in soil moisture levels and they all behave very similarly.  4W green had to be totally re-drained as the existing drainage had been badly contaminated by the "marine mud" that formed the base of the green.  8 on the other hand had probably the best and most functional drainage system that we have seen on any of the greens.

Both 2 and 3W were planted on Thursday which was a tough time given the gusty wind and rain squalls that came through.  Getting the growth mats down was quite an experience and achievement.  So that takes us up to 6 greens planted with only 9W untouched and that should start late next week so this will be the last Saturday comp played on bentgrass at Coolie Tweed!!

A short video above showing the base layer on 4W being rolled, watered and  the final trim by the Bobcat.  531 tonne of sand was needed to re-fill the hole that we excavated and that was on top of more than 100 tonne of drainage gravel and 150 tonne of the top layer sand blend will most likely be required.  The reason the staff are watering is to help compaction which is necessary to make sure the finished surface remains true to construction finished levels.  And speaking of compaction the River greens renovations are planned for November 20 and 21 when we will be relieving compaction in the greens.  We have a couple of new implements that are going to be used so we are planning on doing the 328 practice green next Thursday as a trial run.

The cooler temperatures we are experiencing are slowing the growth rate of the new greens down as we really need some warm temperatures to get the soil warm and the grass responding.  It is a bit more pleasant to work in and I must again commend my crew for their dedication to the task with impromptu overtime never being a concern as long as we get the job done.


Posted by Peter Lonergan at 5:43 PM No comments:

Another week has flown by and the front nine West greens project continues.  6 was planted as planned on Tuesday but the cyclonic winds that started up meant it was a very difficult job with the stolons blowing away as they were dropped.  A problem with the suppliers machinery meant that the stolons were very clumpy and it took a lot longer to plant than is usual.  The machinery is currently under repair so no stolons are available until next week so both 2 and 3 will be planted next Thursday.  The Santa ana collar at 6 was planted on Wednesday and the green covered in the much calmer prevailing weather conditions.

3W green didn't really unearth any great surprises but 2W certainly did.  We have thought for a while that 2 was a green built straight on top of another and that was certainly the case.  The drains were only just 300mm under the surface and even less in places which meant the green needed to be re-drained which was done.  As we dug the trenches for the drainage we unearthed another drainage layer that we assume belonged to the previous green.  Both 2 and 3 had a slight re-design in the front half to try and soften the slope that existed there as part of the works.


1W received its first mow on Thursday 20 days after planting which was a little bit quicker than 13 which was the first green done last year.  It was a great result and the mowing height has already been dropped by 4mm.

4W is the next green on the agenda and will be started next Monday with 8 later in the week.

And if you think you've got a tough job spare a thought for the Masked Lapwings (formerly Plovers) and their three chicks around 17R.  The 3 offspring are all over the place meaning mum and dad are constantly trying to marshall them.  And the cooler overnight temperatures don't seem to be helping much with mum having to literally take the 3 of them under her wing to keep them warm and dry!!

Posted by Peter Lonergan at 5:49 PM No comments: