The week that was

Well the week kicked off last Sunday following the Men's Foursomes Championships with﻿ the River greens renovations starting with the greens scarifying.  8 greens were finished on Sunday afternoon which was a great effort.  On Monday we started hollow tyning the greens and this time used a "mini tyne" which was 7mm in diameter compared to the normal 16mm tyne.  This meant a smaller hole but more of them as can be seen in the video.  The material was left on the green then rubbed in to the surface which left the "stubble" to be blown off.  Fertiliser and amendments were then added and only a handful of greens required sanding to fill the aeration holes.  It is hoped that this method which is quicker than the normal method will allow for a much faster recovery time.  If the weather had stayed fine on Friday the greens would have received their first mowing then as they need to be dry to mow the first time.  The weather also has to be on our side when doing the renovation this way as you need fine sunny and windy conditions to dry the cores out enough to allow them to be rubbed in.
﻿
﻿
﻿﻿ ﻿﻿﻿﻿

﻿﻿﻿﻿We were able to then take advantage of the weather conditions to get the tees on the River course hollow tyne aerated and rubbed back in using a similar method to the greens but with the 16mm tynes.  A hint of some rain on the way on Tuesday allowed 6 tonne of fertiliser to be applied to all the River course fairways which wasn't actually planned but if rainfall is on the way then you take advantage of it.
Next on the agenda was some work on the 8th River fairway drain.  The 900mm pipe that connects the dam and the river has had several areas of subsidence over the years.  About ten years ago we excavated and exposed the pipe and placed some material on it to prevent the subsidence which worked quite well until the material disintegrated after contacting the salt water and needless to say this material is no longer recommended for this purpose.  The pipe was exposed and two causes of the subsidence emerged which was the separation of the pipes and the exposure of the pipe lifting hole, which both allowed sand to enter the pipe and erode the surface.  The pipe was fully excavated and a geotextile fabric was wrapped around it then crushed rock placed over the top of this.  Another fabric was then placed over the rock and the hole back filled ready for re-turfing.  By blocking off the escape points for the sand it is hoped that the surface will hold.  If it doesn't then the pipe will need to be replaced at a great expense.﻿
﻿
﻿

﻿The rocks at the headwall of the dam at 6 River were then also replaced with much larger rocks and a far more suitable construction method to deal with the tidal movement of the water.﻿﻿﻿﻿﻿  Concrete was poured behind the rocks for added strength and smaller rocks embedded in to the concrete that over time will color up the same as the rocks so as to blend in.
﻿
﻿


Then it was over to the 11th River tee to excavate the rear portion of the tee where tree roots had appeared on the surface.  The picture below was the first load removed from the middle of the surface of the men's back tee blocks.
﻿
﻿On Friday the oversown tees were lifted in readiness for turfing on Monday.  It takes a day to prep these areas and the reason they are prepared on Friday is to allow the turf to be laid on Monday which means that by the following week end the turf will have taken root and not require any supplementary watering which saves on labour costs.  The tees will be back in full play within 3 weeks.  The material lifted from the tees has been used to cover exposed tree root in rough areas and although the finished surface is initially quite rough it does settle down and is far better than playing from amongst tree roots.
﻿﻿So that was my week in conjunction with maintaining and preparing the playing surfaces elsewhere on the course in the high winds and rainfall that occurred later in the week.  Just another seven days in the life of a Golf Course Superintendent !!
Posted by Peter Lonergan at 10:24 AM No comments: 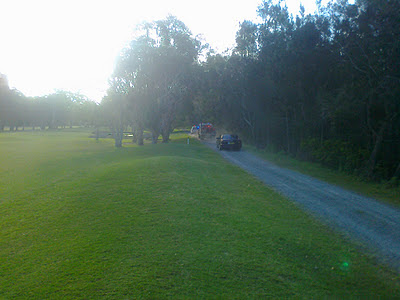 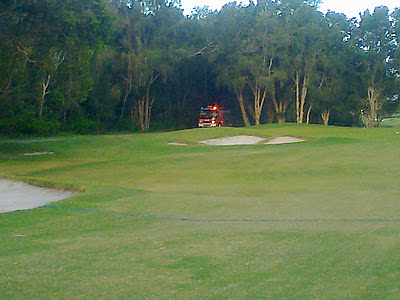 Well it wasn't quite the finish to Friday that I was looking for when I had to help escort 2 fire trucks out of the dead end they found themselves in near 8 River fairway and then back around and out of the course!!  They were apparently chasing a fire in the Ukerebagh Nature Reserve alongside the course and were told to get there through the golf course.  I don't think any of them had any idea what a green, tee or fairway was so I think it was fortunate I was still here!!﻿
Posted by Peter Lonergan at 6:34 PM No comments:

﻿The winds have been very cold the last few days but things are hotting up on the courses with quite a bit of work planned.  Following is a bit of a summary and as usual it is all subject to agreeable weather.

Posted by Peter Lonergan at 1:54 PM No comments:

Firstly thank you to those Members who came along to the Bunker Symposium last Monday. The name "symposium" was given to the meeting and I checked the dictionary to check the correct meaning which I am glad to say was correct, being:  "a formal meeting held for the discussion of a subject, during which individual speakers may make presentations".  I actually might have preferred another meaning being:  "a drinking party in ancient Greece, usually with music and philosophical conversation".  Well I don't know if there was much philosophy spoken but after talking for an hour and a half I certainly needed a drink!

I trust I was able to explain ﻿some of the issues that we face with the bunkering on the golf courses.  One of the reasons I have the Course information sessions is to be able to cover the topics in detail as what I said on Monday night would take pages to exain in writing which I doubt many people would read.  The following is a response to a member who was unable to attend the session but emailed some of his concerns to me.

In a nutshell the River bunkers are much more functional than the West bunkers due to their ability to handle excessive rainfall.  One exame I used on Monday, was last Saturday morning when we received 20mm of rain in the morning and no one ayed.  As soon as the rain cleared there was a full field out on both courses.  The River course bunkers would have been fully ayable whereas the large majority of the west course bunkers would have been full of water.  The hard packed fairway bunkers on the West course would have virtually all been full and bordering unayable.  This after just 20mm of rain.

I mentioned at the meeting that the number one criteria for bunkers in a climate such as ours is drainage.  The volume and regularity of rain that we receive dictates this.  Other courses on the Gold Coast / simy just take their bunkers out of ay, sometimes for weeks at a time after a serious rainfall event.  We have had numerous golfing events virtually every year on the River course that have been able to go ahead following excessive rainfall with bunkers fully in ay whereas the West course bunkers would have been unayable.

The West bunkers do have sand added to the ay areas on a regular basis but when the faces are washed out by rainfall the soil and silt (read rubbish) that is washed to the floor of the bunker then mixes with the sand to give the firmer type of surface.  Unfortunately this surface is then not able to drain and the bunker fills with water.

Anything up to 100 man hours are often required to re-instate the West bunkers following a rainfall event that washes them out.  The River course bunkers on the other hand are able to be raked as per normal immediately following the same rainfall event.

I haven’t actually done a spread sheet /analysis on the matter but looking at labour input and the cost of sand, we would spend just as much on bunker maintenance as we do on greens maintenance on the West course alone.  I shudder to think what the ratio would be if the bunkers on both courses were as dysfunctional (from a maintenance point if view) as the West course bunkers are now.

The seemingly most unpopular bunkers are the fairway bunkers on 6 River and 7 West.  These bunkers actually have the same type and depth of sand as most of the greenside bunkers on the River course but as they have less irrigation landing in them they are always drier than the greensides.

There were a number of issues raised at the meeting on Monday night and they will be considered by the Golf Management Committee.  Grass faces and potentially removing some bunkers was canvassed for exame.  The pros and cons of either of these options were also raised.  It is not an issue that we don’t care about, indeed bunkers are constantly discussed and different trials using sand and other potential solutions are assessed continually.

I realise that the exanation above doesn’t make the bunkers any more ayable for you, but as I said, in our climate drainage must come first if you want to have numerous high faced large bunkers.  I trust that this very short summary of what was talked about on Monday night helps exain some of the aspects that affect bunker presentation on the courses.
Posted by Peter Lonergan at 1:30 PM No comments:

The fairway aerating has commenced for this season.  This operation helps to reduce some of the compaction caused by the huge numbers of golf carts that use the courses on a daily basis.  It is quite an old machine that we use and whilst not perfect it does a reasonable job fairly quickly and penetrates up to 150mm.  If weather, play and manpower permits the fairways will be covered twice in the coming weeks.  The River course has nearly been completed for the first time already.  The damage to the fairway surface from the machine doesn't interfere with play too much and is repaired by the fairway mower going over the fairway.  This will result in some scalping of some areas and can only be done once the surface is dry to prevent the build up of dirt on the rollers.  The local rule concerning relief from "aeration holes" should be used to if your lie is affected.

Posted by Peter Lonergan at 11:27 AM No comments: