A beautiful week of weather once the wind died down and the courses are in excellent order heading towards winter.  A very good cover of grass on all playing areas should ensure good playing surfaces throughout the low growing months of winter.

We are still having troubles with leaking sprinklers caused by a leak on the main control line and thought we may have found the problem when an old fitting on a 2 inch supply line had so much corrosion that the effective pipe size was less than 1/2 inch.  It too has helped but not solved the problem so the search will continue for the cause of the drop of pressure.

A number of members have asked about the availability of some mulch from the fresh piles down at 6 River following last weeks grinding and I am happy to advise that we regularly drop mulch up in what is known as the "picnic ground" next to the main buggy shed car park.  This mulch is available free of charge to members.

Posted by Peter Lonergan at 5:53 PM No comments:

The beautiful weather continues and let's hope it doesn't rain for the dawn service on Monday, oh and for the golfers as well!!

Another fairly hectic week on the courses with the best thing from my point of view finding the leak that has been causing the sprinklers to leak.  As mentioned before we have what is known as a "hydraulic" control system on the sprinklers meaning water pressure is utilised to keep the valves closed and when the water pressure is released the valves open.  Hence any leak or drop in pressure can cause problems.  A leak detector was engaged and he said the leak was in 17R mens tee which was close to a repair carried out in 2007.  So knowing that it was 7 feet deep a digger was bought in and what we thought would be a fairly small hole turned in to half the tee.  Alas there was no leak.  Further investigations were conducted and another leak detector was engaged and the leak was finally found and repaired on the front 17R tee and was only 4 feet deep.  So know hopefully no more sprinkler leaks on course.

They don't make them like they used to could be said for our fertiliser spreader which was purchased in 2009 and had a major component rust out and it actually dropped out whilst fertilising 7W fairway resulting in 3 times the fertiliser required being applied.  This resulted in quite a burn after the buggies had driven all over it but with the current weather recovery should be swift.

The wheel marks are the only blight on the courses as once again I remarked to the staff that both courses are as good as I've seen them and the new rough cutters delivered his week will only help things out.

Posted by Peter Lonergan at 5:48 PM No comments:

The temperature finally dived below 20 this morning for the first time since mid December which was a welcome relief.  The day time temperature has also fallen below 30 which is the first time probably this year.  Soil temperatures have also dropped which are critical in 2 ways the first being that the bentgrass roots can start growing again and the couchgrass roots start going to sleep.

85 mm of rain also fell this week with the big one on Tuesday morning that dumped 50mm in an hour just before the ladies were due to hit off.  Unfortunately most of this water ran off the courses but a couple of follow up overnight fall have been very welcome.  We were able to take advantage of no play on Tuesday and got the West greens solid tined which allows for some much needed air exchange after such a long hot summer.  Unfortunately a machinery malfunction caused some tearing on 2 and 11 but the benefits to the greens far outweigh this negative.

The 2016 Masters has been and gone and despite all the commentary about Jordan Spieth's woes I couldn't help but admire his conduct in the face of such an adverse situation.  Truly remarkable for a 22 year old to have such a demeanor  A couple of things that I did notice was the amount of sponsorship on the players clothing. Perhaps it was against the backdrop of the one dimensional green colour of the course which is something that Russ Davis commented on upon returning that the whole course was the same colour green, apart from the parched greens that is.  It would be interesting to see the players devoid of the logos like the old days.


And below is a photo of the fairway mowers doing their thing.  The fairways are all mown in the one direction from the green back to the tee and I can count 13 in the photo which was the number of staff I had in today to maintain the full 36 holes @ Cool Tweed!!! 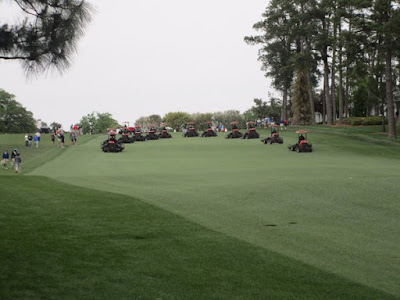 24 degrees and 84% humidity in the shed compound this morning made for a very uncomfortable start to the day and further proof that summer isn't done yet.  It is the second week of April right??  The fairways are still powering along and may need another application of growth regulator which has never happened after mid - March before!!

The West greens are showing the effects of an excellent result with the control of encroaching couchgrass.  The runners that the plant is now producing are evidence of a very good result although can affect the putting surface.  The greens are still struggling with the heat and humidity although the only reason I walk on 17W green is to see how well it is doing!!

A very busy week with the tree removal at 3 West green.  A huge improvement is expected in the putting green quality and also the green surround that got very slippery during winter last year to the point that the area was not walkable.  Some turf will be laid on Monday to finish the job off.

The River greens received a much needed sanding today although the light drizzle wasn't very helpful in drying the sand to allow it to be rubbed in.  As soon as the weather cools the West greens will also get a sanding to help re-level the surface.  If sand was put on the greens in the heat we are experiencing it would "cook" the greens.

I trust Russ and Gary enjoy their time at The Masters this week and don't come back with a dose of "Augusta Syndrome"!!  This is what Superintendents call players lofty expectations of their own course after seeing Augusta either on TV or live on course.  The Masters really is a show on its own and Augusta make a lot of their own rules which is fine but they also have a near perfect course made possible by a big budget and a huge staff come tournament week.  And the extra staff aren't just some "dads army", they are some of the most senior staff from some of the worlds best courses that volunteer for the week.  It is probably the most high pressure Supers job in the world and the current Super has been there 19 years which is an enormous achievement but as the club forbids its employees to speak publicly unfortunately you don't get to hear from him.  But let's sit back and watch how the week end unfolds and hopefully one of the Australians can do us proud although they are going to need to shoot low after poor first rounds.
Posted by Peter Lonergan at 6:53 PM No comments:

I think I went a bit early last week with the "summers over" call.  A beautiful week of weather but some last minute summer disease problems on the West greens was just not what was wanted.

Once again short staff numbers with sick wives and children requiring care and one of the casuals successful in getting full time employment really had us under the pump in a short week with strong growth.  The fairways are still powering along and this is very unusual to have this much growth so late in the season.  242mm of rain in March that fell on 20 days and constant 30 plus degree temperatures is obviously partly responsible for the growth.  We are still to drop below 20 degrees overnight and the coming week promises more of the same.

For today's corporate day we installed a "big hole golf" hole in the practice green.  I'll leave it there over the week end for players to try. Big hole golf hasn't taken off to the extent that "footgolf" has in Australia with quite a few clubs running days that are gaining popularity.

As mentioned last week a number of dead and potentially dangerous trees were removed today and next week we will be removing some trees adjacent to 3 West green.  The photo below is of a Eucalypt on RHS 7W that wasn't hanging on by very much!

And another week goes by with poor etiquette on the courses.  The top one is two totally untouched divots but then again if you can only hit it 10 feet you're in for a long day.  The second is of a divot taken out of 3W green which is one of at least 12 divots out of greens since Christmas.  A couple of juicy unrepaired ball marks too and the old chestnut of a totally unraked bunker after a shot on the right hand side.  At least the others made an attempt..

Posted by Peter Lonergan at 5:39 PM No comments: