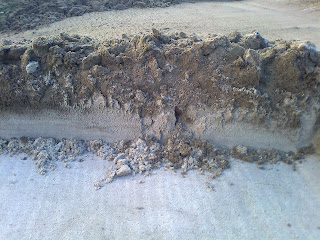 ﻿The photo above is from the back bunker after the first "dig" and shows where the actual "bunker sand" was -   about 100mm under the playing surface buried by all the soil type material that washed to the floor of the bunker following rain washouts.  As I have said before this is why it is so important for the bunker faces/walls to have the same sand as the floor of the bunker to stop this contamination from occurring.  That does mean a propensity for balls to plug in the face from time to time but it reduces labour input and prolongs the life of the bunker.  And most importantly it means that the bunker will drain which in our climate is critical.  The sand we used in these bunker works has been used in some our recent top ups but it is the first time we have used it in a total re-construction.  It has been widely used with success throughout south east Queensland over the past 18 months so time will tell for us.
Posted by Peter Lonergan at 6:03 PM