I have had some time over the past coue of days to see a bit of the US Open golf at The Olympic Club in .  I was lucky enough to ay the course in early 1988 just months after the club hosted the 1987 US Open and the course bears little resemblance apart from the topography and general layout of holes.  There have also been a coue of very controversial changes (from some members point of view as would be expected) made to the 7th and 8th holes.   There has also been some major tree clearing to allow for improved turf growth conditions and the general grooming of the course is indeed outstanding.  It makes you realise just how far golf course management has come in the last 25 years or so.  Although as I have mentioned before the pressure that the quality of the aying conditions at a US Open brings upon us regular Supers is always present.  The age old "why can't our course be like that?" comes up every time.
A few facts on the Olympic Club to help paint the picture.  The Club is an athletic club and has over 5,000 members who compete in a wide variety of sports.  There are 45 holes of golf consisting of The Lakes, The Ocean and a 9 hole par 3 course.  The club has a regular full time grounds staff of 50 and there are 100 volunteers on site for the US Open which is being ayed on the Lakes Course.﻿  This includes a contingent of about 12 Australians and a female Superintendent from .  The greens average 450 square metres (about the same as 18 West) although the 18th which has also been modified comes in at only 250 square metres.  The greens were rebuilt in 2008/9 and were turfed with a mix of Tyee and 007 Bentgrass which are varieties I have never seen.  But looking at the way the greens are aying it looks very very good.  The greens were previously Poa annua as most Californian courses are and suffered from numerous ailments that affected the aying surface.  Poa annua is very hard to control in the west coast climate that Olympic experiences but they look absolutely pure.
I saw a video on some of the course preparations and noted that there were 11 fairway mowers sent out and a roller for the fairways!!  That’s right a roller.  I saw Tigers interview after the first round when he commented that he couldn’t believe how fast the course was.  Please don’t tell me we are going to have to stimpmeter fairway speeds!!
A coue of photos; 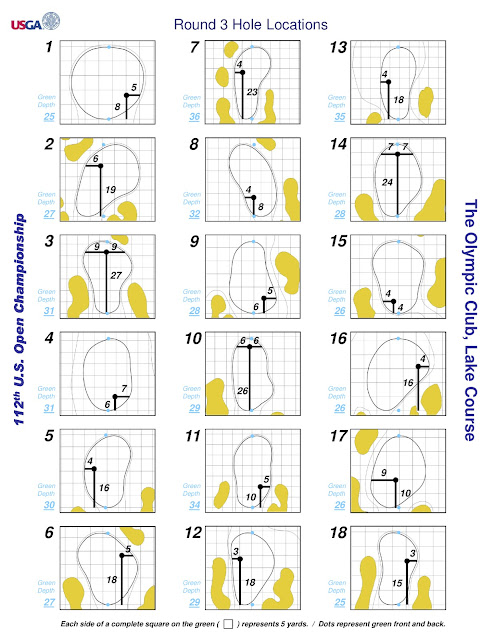 Posted by Peter Lonergan at 9:12 AM