There is nothing like "bunkers" to get a topic rolling﻿ along and thank you very much for the replies both here and via email to the earlier post about trees affecting play lines.  Opinion is very much divided with all sorts of options offered as you can read in the comments section of the post.  At this stage I doubt anything will be done as far as full removal is concerned but there may be some "rigorous" pruning take place.

A few comments suggested filling some bunkers in and the Board have already identified 3 bunkers that will be filled in and grassed this year which are ones already mentioned amongst the replies.  The RHS fairway bunker on 14R, the LHS fairway bunker on 5R and the RHS fairway bunker on 2W will be grassed.  There are others to be done in the future as budget allows.
Other works on bunkers this season will be the removal of stone contaminated sand and the installation of a lining product and new sand as per the work carried out on the greenside bunkers on 4W earlier this year.  The bunkers to be done are;  front RHS 15R, front RHS 12R, rear RHS 5R and 16R and the rear bunkers on 2R, 3R and 17R greens.  The drainage in these bunkers does not require replacing so the drainage lines will be flushed out which means it is not as major job as was carried out on 4W.  There are other bunkers with stone contamination but once again these are considered the worst and others will be done in the future.
There will also be sand added to many of the bunkers on both courses as a routine maintenance operation in the coming months as well.
There have been a few comments about the actual rakes we have for members use on the courses.  There are two distinct types and each allows the head to be turned upside down to allow for smoothing as well as using the tines for raking.  The River course rakes are a little heavier to help get through the "fluffier" sand and the West course rakes quite lightweight in comparison.
There have been suggestions of other types of rakes that we could use but with the variable weather and resultant condition of the sand I feel these two types are best suited to our normal prevailing conditions.  That is if people used them and more importantly used them correctly.  It is not possible to rake a bunker successfully one handed and I rarely see any players use both hands before tossing the rake wherever, generally in a temperamental state.  At least the rakes we use are nearly indestructible.  And speaking of how players treat bunkers - there are those that don't rake at all such as the one below on 4 River. 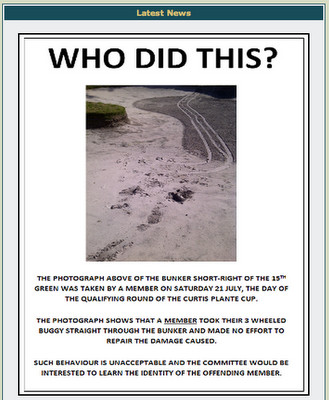 Then again you could have the above scenario which happened at Metropolitan GC in Melbourne in a Saturday comp earlier this year.  But my all time favorite is the one below which is when a golf cart tried to drive out of the bunker on RHS 13 River. 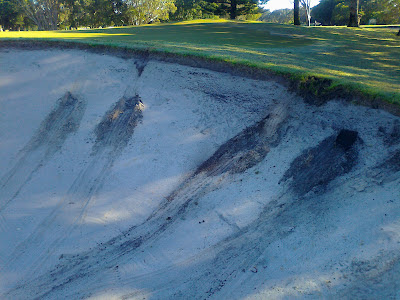 Posted by Peter Lonergan at 3:39 PM