Well the countdown for the West greens Tifeagle conversion is now down to next week!!  The temporaries got a sanding this week to finish them off.  13 will be the first green that we do as there is an irrigation main that needs replacing through the old bunker on the left hand side where we will also make some adjustments.  14 green will need a new irrigation feed and that will be bought in across 12W fairway which is why there is a trench across the fairway.  This work will also be completed on Monday whilst the irrigation mainline is empty.
As the temporary greens are bought in to play we will mark some distances on the fairways to the middle of the greens to assist players without a measuring device.


The winds of spring have returned and have left the courses looking pretty messy going in to the week end.  Although it isn't just Mother Nature who makes a mess of things on the course with this inconsiderate left hander with size 10's leaving a freshly raked bunker on 5W in a fine mess for his following players.  Really gets frustrating when you see this sort of treatment of the staff's hard work. 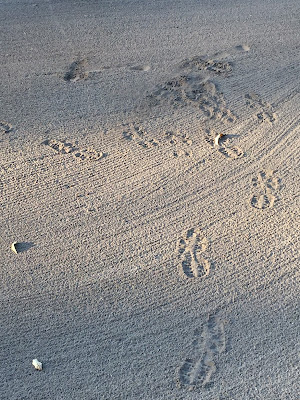 And as you watch the Ryder Cup this week end it may be worth pondering how a staff of 185 can be controlled which is 10 people per hole which is nearly as many as I had on 36 today!!  The course has been shut to member play since the start of September and there barely looks to be a blade of grass out of place.
Posted by Peter Lonergan at 6:21 PM