So much for the call of nice winter weather last week.  A particularly cold and wet end to the week although the courses were drying so the rain was welcome for the turf but not so much for the players.

Our irrigation control system was installed in 2002 and consists of a central computer that communicates with the 25 on course satellites which then operate the sprinklers.  As mentioned a couple of weeks back we are having issues with some of the components in the satellites and that some are now out of production and unavailable.  To ensure that we have some necessary spares we changed the satellite on RHS 9 West to a new irrigation control system known as "GWave" which we have been trialing over the past few years.  GWave is a wireless control system that sends underground radio waves from the controller to the sprinklers which overrides our existing system and so freed up a full bank of 12 components for use as spares elsewhere.  To enable the GWave system to be installed the sprinklers need to be changed over as well and that happened this week.

The US Open golf is on next week at Shinnecock Hills Golf Club  and from all reports the course is in incredibly good condition which it generally is during the golf season.  Shinnecock is one of the most private clubs in the USA and one of the best.  Normal staffing levels are around 30 on the course and that has been lifted to 40 for this season before the army of volunteers arrive for tournament week.  It is a particularly windy site and no two consecutive holes run in the same direction and some cut across each other so it is very difficult to read the wind which makes it very difficult to play.  The USGA do take over course set up for this tournament so hopefully they won't put it over the edge as happened last time they were there. 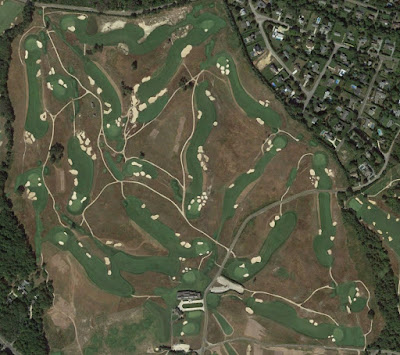 Posted by Peter Lonergan at 1:23 PM