A great week of storms and subsequent rainfall for the courses with just over 80mm of rain falling on the courses and what a difference it has made, particularly to the fairways.  Although I think we were lucky not to get the storm on Thursday afternoon which had some pretty serious hail come down.  See the radar below.  The roughs have also started to grow and we haven't really had this amount of heat, humidity and rainfall concurrently for a couple of seasons. 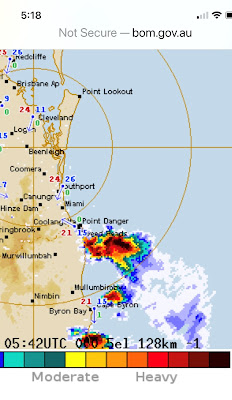 An application of growth regulator went out on the fairways this week to try and slow them down.  The growth regulator not only slows the growth down it also helps the plant green up and become more resilient.  It has also been proven that it aids in divot recovery and also increases root growth which I have witnessed firsthand.  A few years ago when we had the bentgrass greens I was applying the product as a trial on the nursery.  I commented to the rep that I couldn't really see much difference on the surface so was unsure about the benefit.  We took a couple of core samples and washed away the soil to expose the root system and the result is in the photo below with the incredible difference in roots in the treated area on the left. 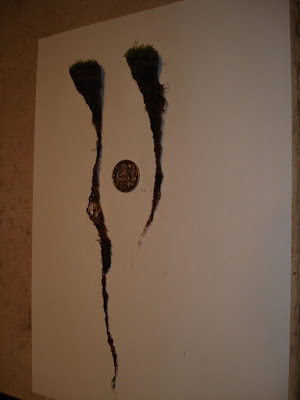 The River greens are now back down to normal mowing height and will receive a sanding on Monday to help level the surface out.  The greens probably won't be mown for a few days while the sand settles in next week.  The West greens renovation has been postponed due to the Club hosting the NSW Open qualifying event which is known as the Tweed Coast Open.  It also includes a Pro am on Sunday December 13 and 36 holes of qualifying on the Monday and Tuesday following.  The West course will still be closed as planned on Monday November 23 to allow us to do a light ''mini renovation'' in preparation for the event.  Given the lack of tournament play available for Pro's in the Covid world you would think it would be a pretty good field with $50,000 on offer.

Posted by Peter Lonergan at 4:55 PM