So much for January 2019 and I hope that I never see one like it again.  Exactly 10mm of rain for the month and officially the driest January on record.  1966 was the next driest with 16.4mm recorded and 2003 was pretty dry with just 18.4mm recorded.  February 2003 followed up with 586mm so although we need some rain 586 might be a bit too much!!.  I also read somewhere that 20 of the hottest years on record for SE Qld have occurred in the past 22 years.  But I am sure the rains will come and at least this week there were some clouds that looked like some rain and we did have a couple of light sprinkles that gave an amazing rainbow on Wednesday morning.  But we need a lot of slow steady rain to bring the parched areas of the courses back to life.


I have had a few members ask if the grass that is "dead" will recover.  In short it is not dead as most turfgrass species virtually go dormant when they are under such stress and recover rapidly once conditions are suitable.


I have a consulting agronomist that I use for advice and was quite happy when we had a look at the growing medium in the West greens.  The slice below is from 4W green and you can see the roots well below 120mm which given the current conditions is very pleasing.  We took some soil samples this week as well and it will be interesting to compare them with some I will take after we get some decent rain which helps dilute the nasties and promote some good growth.  Given the poorish quality of our irrigation water it is expected that salt levels will be very high which should have a detrimental effect on the roots but these are doing very well.  When the greens were renovated in December a large amount of Gypsum was applied which is a very good way to negate the salt which is of great benefit now. 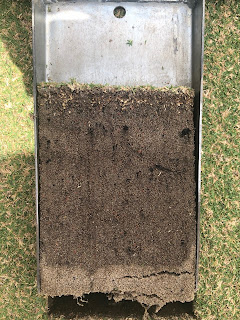 The darker soil in the photo is the 100mm layer of amended sand that was put in to the new greens on top of the same material with no amendments.  One of the concerns I had was whether the roots would push past the amended sand but as you can see in the photo they are powering through.

And the end of an era of sorts with Len Korn retiring from duties today to return home to WA to be closer to family.....and probably give the championships a shake at his club Rockingham as well!!  Len joined our crew in 2006 and I don't recall him ever ringing on the morning of a work day to tell me he wouldn't be in.  Super reliable and a very productive mowing operator who will be missed.  Good luck in retirement Lenny.
Posted by Peter Lonergan at 5:58 PM