At last a fine sunny day that should help start the drying process and I have never seen the courses stay this wet for this long.  The light nature of the rain means that the water just sits in pools and with the soil profile saturated the water has literally nowhere to go.  We are blessed to just be talking about some water lying about the place in comparison to many other clubs on the eastern seaboard who have been flooded and covered with silt.  Many SE Qld and NSW central coast courses flooded again this week although nowhere near to the extent of a few weeks ago.

We haven't attempted to mow fairways this week due to the soft conditions and only a small amount of rough was able to be mown.  We are lucky that there is no more serious heat so that the grass isn't growing too strongly although on the other hand it would be nice to get some more growth to set us up for winter.

We have had a really weird reaction take place on the West greens this past week.  The greens were fertilised on March 30 in the lead up to Easter and there appears to have been some sort of reaction take place with the nutrients releasing in a haphazard way resulting in some blotchy patches appearing.  We put a soil conditioner and some more fertiliser out this week and they are returning to a consistent colour.  When the River greens were new we had similar occurrences as the high rain levels leach a lot of the nutrients out but it hasn't happened to the West greens before and we have certainly had enough rain to test them.  We have sent away some soil samples to see if that will provide an answer.  I have used the mix of fertilser for my whole career and have never seen this issue before.  Another course who used the same sand supplier has had a similar issue this week which makes it even stranger.

And a rare double rainbow nearly formed on Thursday morning which was quite spectacular but it also meant there was some more showers hanging around.

A couple of shots below from Windsor CC in Sydney in Sydney this week who bore the brunt of the floods.  As I mentioned above we only have some casual water lying about now. 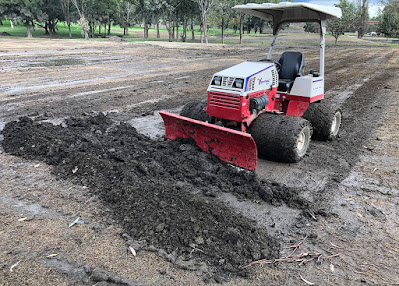 Posted by Peter Lonergan at 5:35 PM