A very productive week on the courses with the mowing requirements certainly waning which allows for a lot of other works to be done.  We have started a program of renovating bunkers which includes the addition of some sand where required and re-facing the faces of the bunkers.  It is labour intensive and slow work but the results thus far have been excellent.

The majority of fairways were fertilised this week and all tees on both courses were also done.  The fertiliser applied has 65% slow release which in a perfect world would slowly release over the next six to eight weeks.  Unfortunately golf courses aren't the perfect world, particularly when you have golf carts driving all over the fairways literally smashing the granules up and causing the nutrients to release.  We will probably finsh up with around 30% slow release left out there which will be releasing and taking advantage of the last bit of warmth in the ground.

The course closure today due to the proposed roadworks gave us the opportunity to get the West greens solid tine aerated which allows some air exchange and helps the greens breathe.  The photo below shows the tine used and we get about 80mm depth.  Once the green is rolled following you hardly know we have been there but the turf roots certainly do.

After a couple of dry weeks the rain looks like it might be back again with an ordinary forecast for the weekend.  Year to date at the end of April has us at 1395mm and since December 1 we have had 1953mm. 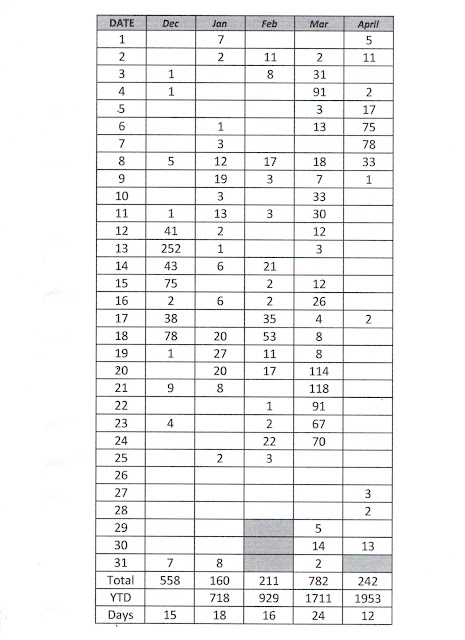 And we took delivery of two new greensmowers this week.  They replace two of our fleet of diesel mowers that had served us exceptionally well throughout their twelve year lifetime.  The new machines are of the hybrid variety and are predominantly powered electrically.  This reduces our emissions and fuel usage significantly but more importantly means we can mow earlier due to the low noise levels.  Our current machines operate at 88 decibels compared to the hybrids 25 decibels.  They also eliminate hydraulic oil which takes away the possibility of burst hoses killing turf on the greens surface.  They have a 14 horsepower petrol motor that operates at idle which powers a generator which in turn provides the power for the unit.  An advantage of this is no battery charging and no restriction on run time as there has been with all ''electric'' models that we have previously trialled.

Posted by Peter Lonergan at 4:49 PM