We just can't seem to get a break from the rain and it has certainly been a roller coaster ride over the past couple of years.  2019 saw a very dry January / February followed by a very wet March / April then the driest ever July thru December.  Then 2020 kicks off with the wettest ever January thru March and then February and December 2020 each being the wettest on record, since 1886 for Tweed Heads.  Then 2021 brings us the deluge we have experienced in March which finished up being the second wettest March on record behind 1906 which was the wettest year on record.  So below is the story of the past four months and although not record breaking it has just been persistent with 73 / 114 days recording rain.  It's been such an unusual summer that there is some Winter Grass (Poa annua) still alive on a couple of greens surrounds which is the first time I have ever seen that at the end of summer.  Poa is a shallow rooted grass that normally can't tolerate the summer heat we have. 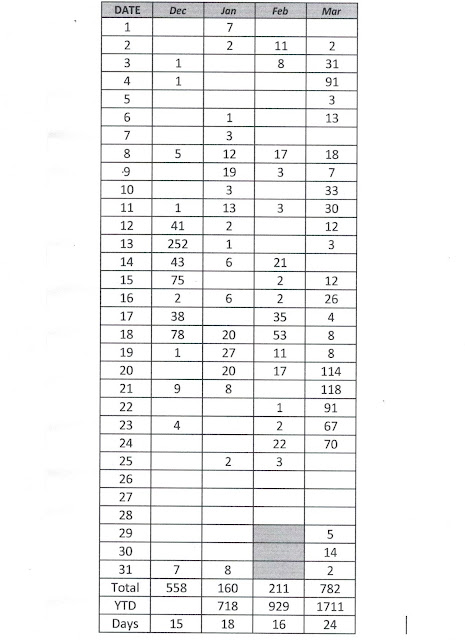 And it doesn't look like it's over just yet with the outlook for the next seven days.

It's hard to remember that we dried out to the extent below twice in 2019.

The lack of sunlight is still not helping turf growth but we are on a par with other years with April 1st seeing us drop below 20° in the compound at 5.30am for the first time since December.  April normally still sees a few days of over 30° so hopefully that will be the case.

All tees on both courses got fertilised this week and hopefully the fairways will also get some fertiliser over the next couple of weeks if they dry out enough.  We have also been able to get a lot of bunker maintenance done this past week with most of the courses being too wet to mow.

Posted by Peter Lonergan at 9:33 AM