﻿The post last week mentioned the use of a growth regulator on the fairways in particular and a few members have asked me about it so I will try and get some photos next week and do a report on the growth regulator then.
I am certainly thankful that the growth regulator is out there at the moment as I have had a sudden departure of staff over the past 2 weeks and with the call from management to curb costs wherever possible, and particularly on payroll, my crew is running very thin.  Firstly our visiting Course Super from Denmark, Martin left after working for 3 months, then a new Greenkeeper from Royal Canberra who had only worked 1 week decided Lakelands was a better spot to work.  One of my casuals Mitch, son of Lindy in the Clubhouse, has returned to Uni and has dropped back to just one day per week and finally Kel, who is one of my Greenkeepers had his appendix out and will be off work for at least six weeks.  So virtually four men down in the space of two weeks and it is a credit to the rest of the crew that you would barely know out on the courses due to their great efforts.
Next week will see a little flurry of pre winter works as follows;
Let's hope the weather holds out so we can get these jobs finished on time.
The River greens have responded well to the lift in height and fertiliser program and have just about covered in the shade affected areas.  12 River green is now being hand mown at a higher height than the other River greens and apart from the front right corner which will require re-turfing is also covering well.  I now feel a lot more confident approaching winter but would still like plenty of fine sunny days but only about 25 degrees would be nice!.
The West greens have handled the mixed bag that summer has thrown at them quite well and in particular the heat and humidity of the past four weeks.  17 West green has also done well and the fan has been worth its weight in gold these past two weeks in particular with some extremely hot, still and humid nights and mornings.
Posted by Peter Lonergan at 3:20 PM No comments:

No it's not a UFO in fact it doesn't even fly but it does look a bit weird and we get plenty of strange looks when we are out operating it.  It is in fact called an Enviromist Spraydome Turf Sprayer.  It uses controlled droplet application (CDA) as its method of delivering the spray solution.  CDA is a super fine mist spray that has been used in agriculture, nursery and viticulture for some time and has now made its way to turf. ﻿
There are many benefits of CDA application and it is a machine that I think every Club should have.  The way we have the unit configured means that it applies 22 litres of water per hectare as it applies the various products we use.  That is compared to our conventional sprayers that apply anything from 200 to 800 litres per hectare and in our case normally 317 litres per hectare.  When you consider that we have 36 hectares of fairways at Cool Tweed it equates to a huge water saving.  This week some growth regulator was applied to the fairways and 30 hectares of fairways were treated meaning that 660 litres of water was used in the operation as against 9,510 if our normal spray carts were used.  You then figure in that the growth regulator is sprayed monthly from September through April equating to a required water volume of 5,280 used with the CDA method against 76,080 for the normal spray carts.   ﻿
The speed at which the machine can apply product is also a huge advantage as we can usually get 7 hectares sprayed in front of play and off the courses by 9.30am versus 4 hectares in the same time with our other sprayers.  The unit is also shrouded and very low to the ground which means that wind has almost no effect on the spray droplet distribution which is a great advantage on such a windy site as Cool Tweed.  All in all a very good piece of machinery that is being used for more and more applications on other areas of the golf courses.
Posted by Peter Lonergan at 4:27 PM No comments:

Who was it that was complaining about the cool rainy conditions??  It has certainly turned around now with the heat right up there with humidity to match.  The good news is that the River greens have responded and are now well on the way to the full grass cover I was talking about in the last post.  The greens will be lightly de-thatched this Tuesday then fertilised and sanded and then not mown until probably Saturday.  The 12th River green is still well behind where it should be so it will receive light aeration in addition to the above.  The mowing height on the 12th will also be lifted to allow the green to become as healthy as possible for the winter.﻿
The West greens although horrendously affected by pitchmarks also have an excellent cover for this time of year.  The tees on both courses were fertilised last week and have also responded well to both the recent heat and fertiliser.
And you know it's dry when the drainage lines start showing up on fairways as can be seen in the photo below of the 18th River fairway. 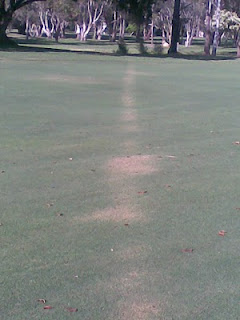 It would be nice to get some rain but not too much so as to spoil the course preparations for the Ladies Masters at Royal Pines this week.  Over the past couple of years they have had a terrible run with rain in the lead up to the event.  Good luck to Cool Tweed Member Paul McLean who is the Course Super at Royal Pines and his staff.
Posted by Peter Lonergan at 8:51 AM No comments:

Doesn't time fly by with February already upon us.  The monumental job of cleaning up Brisbane's flood effected golf courses continues with helpers coming from as far away as Peninsula GC in Melbourne.  McLeod GC already have some holes open as does Wolston Park.  Both Brisbane and Indooroopilly had their courses playable over last weekend with a few shortened holes in play.  On our own patch here at Cool Tweed I don't think I have seen the course better for this time of year although the River greens are still a bit behind where I would like them to be.
The weather over the past two weeks has returned to a traditional summer with hot sunny humid conditions that has helped the River greens in particular move towards a full grass cover.﻿  As I mentioned a couple of posts ago it is imperative that the River greens enter winter with a full cover of grass so they can deal with the shade issues that restrict growth and wear from our heavy play.  With Cyclone Yasi bearing down on the Queensland coast meaning potential rainfall for us and our long term local forecast of more rain, meaning cloudy conditions, I have this week opted to slightly lift the mowing height on the River greens to encourage the last chance at optimum growth conditions.  There has also been some re-turfing of some of the worst areas that have not recovered from last years shade on greens 4 and 13.  The greens will be fertilised this coming Thursday, weather permitting, and will then possibly be de-thatched depending on the weather and will definitely be sanded in the coming weeks, most likely next Tuesday following the Ladies competition.  If I can attain a full recovery of the turf surface the height may be lowered back next month.  We are certainly not alone with our greens being behind where they should be for this time of year with every SE Qld Superintendent I talk to experiencing the same and all the Course Blogs from the local area mentioning the same.

The West greens have not enjoyed the return to traditional summer temperatures but are in great condition for this time of year with the dis-coloration from the foreign Couch control a bit unsightly.  The high soil temperatures we are currently experiencing literally shaves the root structure of the Bentgrass meaning that the greens need to be kept moist to survive.  This in turn means that pitchmarks are at their worst and that is clearly evidenced when you walk on any west course green.  Please, please, please help the turf by repairing your pitchmark as every un-repaired pitchmark is a potential site for disease infection.  This is the type of weather that the fan at the 17th West green was installed for to help the green cope with and appears to be working with the green in the best condition it has been in at this time of the year for some time.
Posted by Peter Lonergan at 3:35 PM No comments: