The wind has certainly been the major player for course maintenance and playing the game this week.  Not only its strength but also the wind chill factor made it an uncomfortable week.  Only the one major tree came down which was late on Friday at the back of the first green.  The debris on the fairways detracts from the courses aesthetics and the number of leaves and branch debris in the roughs makes it most difficult to find golf balls.  The rotary outfront mowers were out in force on the roughs and fairways trying to clean up as much as possible.  They are fitted with "mulching blades" that smash up the leaves and debris leaving a much cleaner surface but the constant wind doesn't help.

Speaking of the wind, a website I have mentioned before - Willy Weather - has a few new features including a "wind rose" which plots the wind directions for the current month and the average over the past five years.  I knew we had a lot of southerlies but was surprised that wind from the south or SSW / SSE accounts for 37% of our wind compared with 20% from the north and NNE / NNW so nearly twice the number of southerlies.  Here's a link to the wind information;
http://wind.willyweather.com.au/nsw/far-north-coast/tweed-heads.html

The West greens have recovered very well from the renovation though repair of pitch marks is pretty disappointing with the greens badly scarred which further prolongs their recovery.  The mowing height is nearly back to normal but the lush growth still needs to slow down for the fine surface to return.  The ducks have been feasting on them leaving their droppings to interfere with play so I thought I would try the fake decoy Hawk but it unfortunately didn't work.  It certainly got the Magpies upset as can be seen in the video below from 12W green and is doing a fine job down on 5W green keeping the Cockatoos off the green.

And Jason Day has set the golf world on fire of late but I got the screenshot below watching the golf this week and it shows just how dominant Tiger was at the peak of his game.  Astounding really.


Posted by Peter Lonergan at 6:02 PM No comments:

A very frustrating week trying to get the West greens mown down following their renovation last week.  The seemingly continual light showers were enough to affect the mowing as the turf needs to be bone dry to allow for a good cut and to prevent sand sticking to the rollers on the mowers for the first few mowings.  The sand finishes up caking on the rollers which then affects the height and quality of cut not to mention what it does to the bearings on the mowing heads.  The plan was to get out on Friday afternoon after the Members competition and give them a nice dry cut until the weather intervened and 25 mm of rain tumbled down in an hour from 11.30. The radar shot below has the yellow dot right over the top of the course at midday when it was nigh on torrential!!  Fortunately the wind dried the surfaces and I was able to get a full mow in dry conditions late in the afternoon.


We have had a few vehicles driving on the courses recently with one about 3 weeks ago driving through the bunker at the rear of 1R green and across the green.  The photo below shows the most recent visitors tyre marks on 13R green just pulling up short of the greenside bunker.  If only they had kept going as I doubt they would have got through given the steepness of the bunker.  Fortunately the actual turf surface has not been broken as of yet which is another benefit of couchgrass over bentgrass!!

The West greens renovation was completed earlier this week and two fine and sunny days certainly helped until the severe electrical storm that rolled in at 2.30pm on Tuesday afternoon which was just two hours early and has meant not all the sand has been rubbed in properly.  It also delayed the opportunity to fertilise the greens so the recovery will be a bit slower than normal.

Even though the greens are renovated it is still just as important to repair pitch marks on them to assist in the surface returning to normal.

In conjunction with the greens works the tees were also aerated and we were able to get over the fairways as well which was a huge effort by the staff and the task is made so much easier by having two full days to complete the works.  I realise it is not the most popular activity we carry out but is one of the most necessary for the health of the turf.

Next week the front of the West greens will be aerated and the holes left open to try and assist firming up these areas.  The greens need a bit more water and unfortunately the irrigation system isn't the most uniform so a lot of water finishes up where you don't really want it to go and the fronts of the greens are the worst for this.

The playing corridor from 3, 10 and 13 West tees were also widened while there was no play on the course.  All three had  grown in severely making the options for tee shots more difficult.  15 and 16 on the River course will be done next week weather permitting.  There were also several other large low hanging limbs removed whilst the contractors were on site.
Posted by Peter Lonergan at 5:44 PM No comments:

The Toll Charity golf day has come and gone in a flash with a lot less paraphernalia on the golf courses compared to last year.  There were still four big prime movers dotted around the courses and unfortunately we got some damage when one of them was being removed.  Fortunately it's over the rear of 5R green where I don't think I have ever seen anyone play from!  It is quite a soft area of the course but quite a "safe" location for the truck. 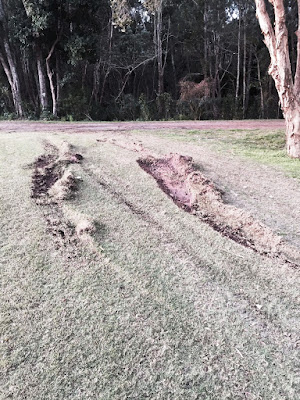 Given the chart below I doubt there would be many "soft" courses on the West Coast of the USA given the intensity of drought highlighted.  Golf courses are doing it very tough over there and brings back memories of some very tough times in Australia not too many years ago. 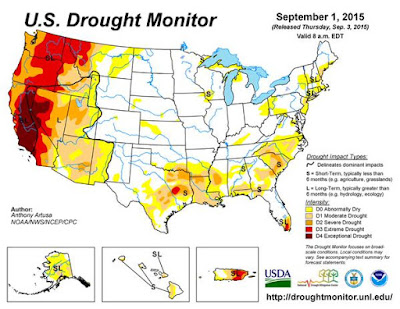 The West greens renovation will take place commencing Monday and will consist of a hollow tyne with 5/8 inch diameter tynes followed by some amendments / fertiliser then a heavy sanding.  Root structure on the greens is still good and the renovation will only improve that situation.

We will also start aerating the fairways next week.  They haven't been done for a couple of years and are in desperate need.  It is not the "prettiest" result on the surface so the local rule for relief from "aeration holes" will need to be used.

And a bit of trivia with my motorbike about to clock up 25,000 kilometres after just four years.  I'm sure glad its got a comfortable seat!!
Posted by Peter Lonergan at 6:07 PM No comments: