A short week and a busy one on the courses with lots of play and beautiful weather.  The Senior Matchplay event went off well and for a change they had nearly perfect weather although the unexpected thunderstorm on Tuesday had them off the courses temporarily.  It was great to hear a lot of positive feedback from the players and the West course looked and played great and was a credit to the hard work of the crew.

We were able to get a different product out this week in an attempt to control the resistant Poa annua. The Tif practice green surround and River greens 3, 7 and 10 were sprayed as well as a few other areas.  Fingers crossed we get a result from this.

Monday next week will see Cool Tweed host the Australian Superintendents golf championship which is played on day one of the 2021 Australian Sportsturf Management Conference which is on the Gold Coast from Tuesday.  Covid restrictions have had a small impact on numbers but the golf field has stayed steady at around ninety players and there are thirty players on handicaps of 5 or less.  Unfortunately Covid restrictions have also robbed us of some Supers who are in their respective State golf teams but it is still a very high quality field.  The winner of the event receives a red jacket (Toro sponsor the event) so you may see a few of the previous winners parading about in their red jackets from the year they won which is part of the tradition.  The winner also gets to play in the American Superintendents golf championship which is obviously going to be on hold until international borders open up again.

And I thought prepping the courses for an elite golf event was a bit stressful but having ninety of your peers looking over your work is pretty nerve wracking I have to say.  The club featured on the front cover of the Conference edition of Australian Turfgrass Management. 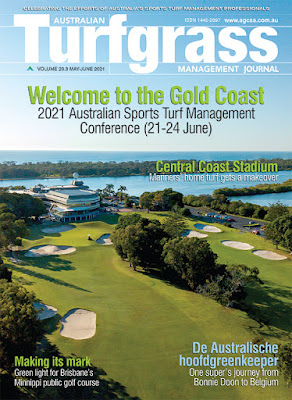 Posted by Peter Lonergan at 4:10 PM No comments:

It almost felt icy this week with a very cold breeze blowing but having spent last weekend at Black Mountain near Glen Innes where it snowed yesterday, this week has been quite balmy by comparison!  All the turf on both courses except the tees are handling winter thus far very well.  The tees are struggling with the sheer volume of play and winter has a long way to play out.  The entrances and exits to buggy paths are also struggling with the huge amount of buggy traffic.  A relatively calm Friday gave us the opportunity to get the main playing syurfaces blown  and the courses are looking in great condition and a credit to the crew.

The resistant Poa annua I have previously mentioned appears to be resistant to the latest product tried so another will be trialled next week.  It is pretty frustrating but at least we don't have the resistance issues that the southern States have been experiencing so that's a positive at the moment.  What would be frustrating though, would be your course flooding literally the day you come out of lockdown in Melbourne due to the stormy weather they have been having this week.  A number of courses on the Yarra River in particular were affected.

I got the photo below early this morning and was thinking about what a great site the courses occupy.

And then this is how the day finished up a couple of hours later...a four inch irrigation mainline repair.

Posted by Peter Lonergan at 5:29 PM No comments:

Not very much to report this week with the Ladies championships taking most of our attention on Tuesday and Thursday.  Pretty much all efforts were put towards preps for those two days and the courses came up really well.

All the fairways and greens got some liquid fertiliser this week and selected tees were also done.  The par 3 tees are really starting to struggle with virtually no recovery and they are looking really chopped up.  We have topdressed a couple of them and will start filling divots as well for the rest of winter.

One of the fairway sprinklers on 18R wasn't functioning properly and when the lid was removed the boys could smell something fishy.  After removing the sprinkler the cause of the blockage was found with an eel jammed in the base of the sprinkler.  Not the most pleasant smell I can assure you!! 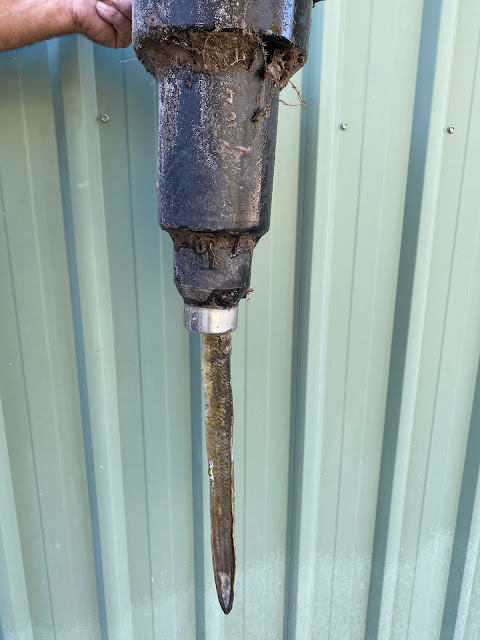 Posted by Peter Lonergan at 3:24 PM No comments: