This made me laugh 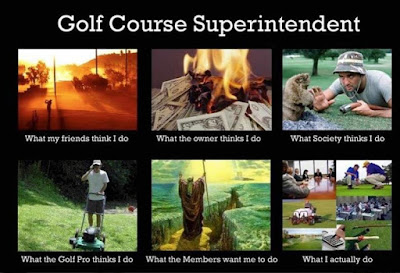 Posted by Peter Lonergan at 2:25 PM No comments:

Just another 100mm (4 inches) of rain last week and there was probably more than that as the wind blew so hard overnight Friday that the rain could well have blown over the top of the rain gauge.  I had reports of up to 160mm overnight Friday in Currumbin Valley so I am glad we missed that.  The week ends rainfall takes us to 763mm (30 inches) for the year thus far﻿ so maintenance programs have been severely disrupted to say the least.
Once again this morning I looked at the days run sheet and wondered how we would catch up on the "to do list" that is growing every day.  Once again with only 13 staff on board this morning it was a tough call on what had to miss out with the large majority of the West bunkers being washed out from the week end rain adding to the list.  So please bear with us this week as we try and catch up with the huge back log of work (and growing rough) that is mounting on a daily basis.
There are a few jobs on the horizon in the coming weeks so hopefully the weather will behave and we can get these done.  In no particular order the following works are scheduled for the next month;

Some of these works have been on the agenda for several weeks now and it will depend on machine / operator availability as to the order of completion.  Watch this space for updates.
Posted by Peter Lonergan at 4:03 PM No comments:

Another week of catching up on the grass after the big wet.  Just about everything is back to normal now except for the lake edges which are overdue for a trim.  All bunkers on both courses have been trimmed and all water damage repaired.  Two of my staff are on annual leave at the moment and as I started anning the week last Sunday I didn't think we would make it.  Just to give you an idea of how works are allocated across the courses I will give you an insight in to anning last Monday for an exame.
I had 15 staff available for the day which includes myself and clubhouse gardener Eric.  The River bunker edges desperately needed trimming and the germination of weeds in the West bunkers meant they needed spraying.  The longer the bunkers are left between trimming means the slower the job as there is obviously more grass to be trimmed.  It is a labour intensive task and also much safer for the staff if they do this work with no fear of being hit by golfers, so hence they are generally done first thing in the morning in front of ay.  In addition to the bunker trimming, holes needed to be moved on both courses, greens, tees, fairways and roughs mown, fairways sprayed with growth regulator and the area on 6 River fairway prepared for the turf that was due to arrive at 8.00am.  Leaves needed to be blown off the greens, tees and fairways prior to mowing, on course toilets cleaned, clubhouse carparks litter picked up and machines serviced by Mechanic Craig.  To achieve the above about 32 staff would be needed to comete all the duties in front of ay and with a 6.00am start on the West course and a 6.45am on the River course, obviously something had to give.  Oh did someone mention bunkers being raked??!!
So the mornings run sheet looked something like this;

A huge effort by your groundstaff this week in restoring the golf course after the wet.  90% of bunkers are now dry and have had washouts repaired.  The last couple of days we have been blowing the debris out of the bunkers as well and just don't have the manpower to achieve all that and get them raked at the same time.  They are fairly hard packed after the rain and the majority should be raked tomorrow.  Just about all the rough has been mown this week after missing 10 days of mowing due to the rain which is a credit to the operators, one of whom is a 17 year old in his first week with us.  At the start of the week I didn't think we had any chance of mowing it all but we got there.  The fairways are showing the benefits of the growth regulator as I mentioned in my previous post.  The photo below shows an area on 14 West fairway just past the road where the area wasn't sprayed last time.  You can see the thatchiness of it and the scalping from the mowers.  This is what all the fairways would be like without the growth regulator.  14 West is one of our Kikuyu / Blue Couch mix fairways and if you look closely at the photo you can see just how restricted the Kikuyu is in the sprayed area.

And you know there hasn't been a lot of play on the courses when weeds start growing in the divot soil bins!!