We finished the rainfall event with just shy of 550mm for the 12 days (or 22 inches in the old scale) which is a crazy amount of rain for any sporting playing surface anywhere.  The moisture in the ground and the heat and humidity is now combining to give us grass growth levels that we haven't been seen for quite a while.  Even the normally slow growing TifEagle greens have put on a growth spurt and the 328 greens have done what 328 is notorious for and become very puffy.

It's time like this that makes you wonder if we will ever catch up with the grass with short working weeks and lots of play making it difficult to get the work done.  On Thursday the first player on the West course was walking off 18W @ 8am and the first group in the comp finished @ 9am on the River which is pretty hard to stay in front of. One of the main challenges we have to get the work done is the amount of repair work still required in the recovery from the rain.  Just blowing leaves and debris out of bunkers is a mammoth task let alone getting to rake them all.  But we have been here before and will battle through it as usual.

And an early Christmas present of sorts with a hydraulic oil leak on 1W green.  Fortunately it was a hose connected to the power steering so was only leaking when the steering wheel was being turned so damage is confined to the edges of the green.

Posted by Peter Lonergan at 5:36 AM No comments:

Well I am certainly glad that seems to be over for now anyway, with 413mm falling since last Saturday.  The forecast for summer doesn't sound good so we may well be in for a wet one. I was planning to be sitting back having a beer tonight and relaxing after the successful hosting of the Tweed Coast Open but now it's just to be glad we got all the fallen trees and limbs off the courses today and the clean up continues.  The consistent inundation by tidal water is frustrating and I don't recall seeing it happen this often.  There is still a lot of water to come down the river so we may have it happening for a few days yet especially with the tides at 1.8m for the next few days and more rain forecast.

A couple more photos of today's inundation below which are both worse than yesterday.

And now I am off on a weeks leave so the courses will be in the very capable hands of Assistant Simon and the crew.

Posted by Peter Lonergan at 4:41 PM No comments:

Very disappointing to have to cancel this weeks tournament especially when the course was in such good condition last Friday, which now seems a lifetime ago.  The courses have handled the rainfall particularly well and we were mowing debris off the fairways this morning without any worries.  The problem we have now is tidal inundation which is rendering both courses unplayable as there are several holes on each course that are un-walkable.  See the photos below of a selection of areas just on this mornings high tide.


All the water in the photos above is from tidal inundation.  We have received 338mm since it started raining on Saturday.  In the same time the airport has received just 236mm.

And this is the seagulls last Saturday morning just after it started raining on 4W dam.  Maybe a sign to look out for in future?? 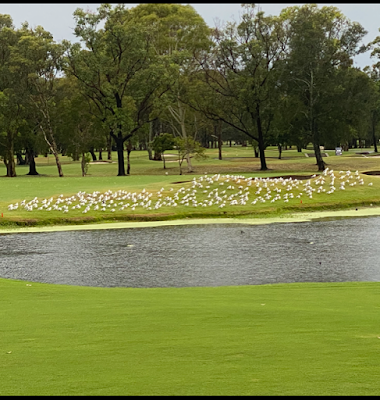 Posted by Peter Lonergan at 11:20 AM No comments:

When it rains it rains that's for sure.  We came in on Saturday afternoon to do some prep work for the Pro am and it started raining at around 4.30pm and didn't stop until about 5am.  250mm fell in that time with the bulk in the front between 11pm and 2am.  A lot of the water had already drained off by the morning but then the combination of a high tide and water coming down the river from upstream pushed the water in on to the courses.  The river broke its bank behind 1R green which is always the first place to go and it must have been fairly high by the high water mark on the speed hump below.  A lot of water has drained off the courses again by 4pm Sunday but quite amazingly the forecast is for the worst to arrive overnight Sunday.  We have not lost any trees at this stage although once the ground gets wet that's when that may well happen but there is certainly some debris out there.

Posted by Peter Lonergan at 4:12 PM No comments:

It never rains - it pours!!  A really disappointing forecast for the next few days with the Tweed Coast Open set to be played from Sunday.  The crew have done an outstanding job in getting the West course ready for play but it may well be to no avail.  Even though the West does get a little wetter than the River, the volume of rain predicted would soak any golf course so unfortunately we just need to grin and bear it.  On my first day at Victoria GC all those years ago the then President said to me ''you will be working with Mother Nature and you can't beat her - so work with her''.  Very good advice that I have thought about often throughout my career, albeit a bit too often at Cool Tweed!.  This is what's coming rainfall wise if you haven't already seen.

After 1500mm of rain fell till the end of March it looked like 2020 might be on track for the wettest year on record but then things slowed and we have had only 666mm since, which for a lot of Australia is a years rainfall total.  Maybe that will change if we do get the expected rain over the coming week.  Although we need a fair bit as the wettest year on record was 1906 when 3,192mm fell which is the only time more than three metres has been recorded at Tweed Heads.  Year to date we are sitting at 2180mm which is a whole lot more than last years 962mm and the average for this location at 1665mm.  The groundwater levels have certainly dropped rapidly in the past few weeks but they should be well and truly replenished in the coming week.

Posted by Peter Lonergan at 4:51 PM No comments:

A very busy two weeks on the courses with the West greens having a mini renovation last Monday week.  The granular fertiliser that was applied has had the desired effect and the greens have responded and are growing quite well.  The extra leaf slows the speed down somewhat but the benefit is that the turf is very healthy and in good shape to get groomed up for the upcoming Pro am.

The dryness continues and once again we were hand watering tees.  This was primarily to conserve water as the sprinklers don't operate efficiently in the wind and the hand water puts the water exactly where we want it to go.  The greens have also had some hand water applied for the same reason as the tees.  We have got quite a blotchy result on several fairways following the fertiliser application a couple of weeks ago with the hydrophobic soils literally repelling the water and thus not allowing the fertiliser to move through and release evenly through the profile.  A good fall of rain will fix the problem and hopefully that will happen sooner than later.

The big job this week was excavating the outer edges of 1R green where the encroachment had occurred.  The job went without a hitch and the areas were stolonised and planted on Wednesday with material harvested from the central part of the green to ensure uniformity.  It was basically the same operation as we did on the West greens with all the soil profile down to the drainage gravel layer removed and replaced with fresh sand which ensures all non desirable material is removed.  To date on the West greens there has been no re-growth of unwanted grasses and I would expect the same with 1R.  The difficulty will be keeping the foreign Couch in the collar from invading as it does so readily on 13R green.  The 328 is such an open turf that it allows the runners to invade very easily compared with the TifEagle on the West that is such a tight surface.  The weather is now on our side with good temperatures evident which will assist in a fast recovery.

And the wind continues to blow which is quite usual for this time of year with the Eucalypts in particular losing a lot of leaves and also bark on a number of them.  It just makes for a very messy time with continual clean up underway.

And speaking of clean up, one of the tasks we have to perform on an all too regular basis is removing illegally dumped rubbish from the levee bank road, not to mention many other areas around the course boundaries.  It's time consuming and not a very pleasant job.

Posted by Peter Lonergan at 3:07 PM No comments: