Well at this stage of the day with a thunderstorm happening and very heavy rain I am quite happy to be going on 4 weeks annual leave starting in about 2 minutes.  About the only good thing I have seen in the rain this week has been a couple of beautiful rainbows.  So I will close out on that and return to the course and the blog in 4 weeks. 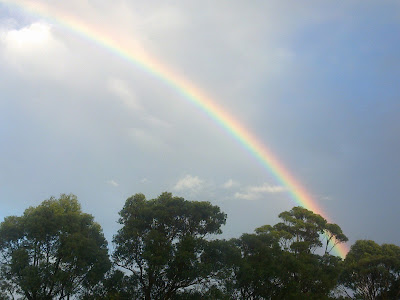 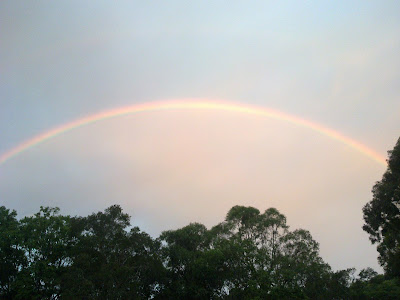 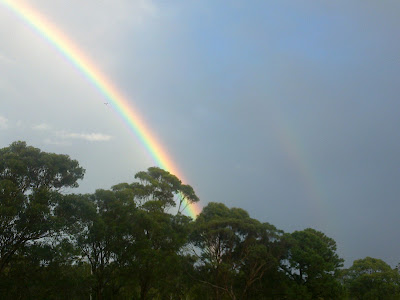 An incredibly frustrating week now coming to an end.  The rain has been nothing but an annoyance particularly over the past two days with regular "scuds" ripping in off the ocean and topping us up.  The courses are very wet, in particular the West course with areas I have never seen hold water before absolutely sodden.  Motorised buggies have been off the West course over the past two days and unfortunately I had to keep them off the River course for the Members Comp today as well.  There is now a lot of wheel track damage﻿ occurring on too many of the River fairways and with the weather cooling and growth slowing, I had no alternative.  We are now approaching 9 inches of rain for April on top off nearly 12 inches in March.  Indeed since March 1st, I have recorded rain on 41 of the 60 days.
Posted by Peter Lonergan at 5:36 AM No comments:

The greens on both courses have responded well to some recent fertiliser and aeration and are really growing some grass.  The West greens have had no fertiliser applied but the deep aeration they received got some much needed air to the roots and you would think they were different greens from what they looked like this time last week.  The greens were mown this morning and the grass catchers needed emptying every two greens compared with the average of 9 to 12 greens.  The downside is the ducks and the droppings they leave behind.  If the weather is suitable a bird repellent will be applied to the greens tomorrow morning.
The River greens were fertilised last week in an attempt to take advantage of the last warmth of the season and they have responded accordingly.  It is very important that the River greens are in the best condition possible heading in to winter.  As the West greens don't like the hot soil temperatures of summer the River greens don't cope well with the cooler soil conditions and shorter daylight hours of winter.  The photo below shows the root system from a plug on the 10th River green showing the roots "out the bottom of the hole changer" which is a very nice situation meaning that we have 7+ inches of roots which is excellent.  Shade is also a major influence on the River greens with greens 2, 3, 4, 5, 12, 13, 15 and 16 affected.  This means that all maintenance practices are shaped around ensuring the best growing conditions possible for these greens.   ﻿
﻿
﻿
Posted by Peter Lonergan at 10:40 AM No comments:

It seems to be a common theme here!  Another 90mm of rain has fallen in the past couple of days.  Once again Coolangatta airport has received less than us which is a trap for you if you check that site for a guide on rainfall as the airport has only received 68 mm in the same period.  The showers only seem to just make land as they sweep in off the ocean.﻿  This is the best place to get a better guide on our rainfall at the Club  as it is measured at Barneys Point. http://www.bom.gov.au/nsw/flood/northcoast.shtml

The West greens verti drain went ahead as scheduled and this rain is actually doing the greens the world of good as it can help flush the soil profile out and also with no play the greens get a break from the wear and tear which they desperately needed after the summer.
Posted by Peter Lonergan at 5:46 AM No comments:

A little nicer on the weather front this week and it has now cooled down sufficiently to be able to aerate the West greens.  Unless the weather turns particularly foul the greens will be verti drain aerated commencing this coming Sunday afternoon and completed on Monday.  We will try and avoid any interference with the Members comp. on Monday but there will no doubt be some.  The verti drain is a tractor mounted aerating machine capable of penetrating up to 12 inches with both hollow tynes, which remove a core of soil, or solid tynes which literally spike the profile leaving a hole on the surface.  In the case of the West greens I will be looking for about 8½ inches with a solid tyne.  There are a few reasons why the greens are done;
The reason the greens haven't been done until now is that they dry out very quickly once opened so the cooler weather we are experiencing now is the perfect time.  It is also necessary to leave the greens open to allow for the air exchange and the greens will only be rolled following the aeration.  The other reason for this is that the verti drain softens the surface and if the mowers went over the greens too soon we would have severe wheel marking which can take months to grow out.  The disruption to play once the machine has finished is minimal and the photo below shows what to expect on Monday
﻿

﻿﻿
A decision has been made to remove some trees (including several declared environmental pest Cadaghi trees) at the rear of the 9th West green.  The trees are interfering with the maintenance of turf on the green by causing too much shade, tree root invasion and dropping of leaf and seed pod debris.  The trees are also having a serious impact on the ayability of the bunkers on the 4th River green and also by dropping debris on the 4th River green itself.
It is expected that the increase in sunlight and air movement will greatly improve the turf quality on the 9th West green which has been slowly deteriorating over the past few years.
The Board will assess the result on adjacent turf areas, particularly the 9th West green, in consideration of further tree removal where the turf growth is being severely impacted elsewhere on the courses.
The effect of shade on the health of turf is plain to see in many areas on the courses, particularly near buggy paths and most certainly on selected greens and tees and is the reason several tees on both courses were oversown this week.   Tree roots also cause problems and the photo below clearly shows how much effect tree roots have on turf growth and health.  It is a photo of the RHS of 14 River fairway where a trench was dug for some irrigation and the subsequent green up and turf improvement on the fairway side of the trench is significant.
﻿﻿
﻿﻿﻿
Posted by Peter Lonergan at 5:20 PM No comments:

Well back to Coolie Tweed anyway.  These are some photos below from my whirlwind visit to Barnbougle Dunes and The Lost Farm which just in case you haven't heard of them are two courses on the NE coast of Tasmania that are literally taking the golfing world by storm.  I only had two play days there thanks to some unannounced flight changes (thanks Jetstar) but they are two rounds of golf I will never forget.  I had played the Dunes before but this was my first visit to The Lost Farm and it lived up to all expectations.  The weather was absolutely perfect and on the Thursday there was not a breath of wind which our host Superintendent said that he had never seen before.  There are many golf websites that will have much better photos than mine so I will leave my collage at these photos.  Interesting to note that  both courses have a local rule -"If your ball ends up in a footprint in a bunker, you are entitled to place your ball at the nearest point of relief no nearer the hole without penalty" - which could be handy at Cool Tweed given the state the bunkers are left in by some of our players.
﻿
﻿

﻿So back to reality and if the weather holds this week the shaded tees on both courses will be oversown with a Ryegrass / Creeping Red Fescue seed mix.  The remaining tees will be verti drain aerated which is an aeration that penetrates up to about 10 inches which allows for some air movement and gas exchange.  At this stage the West greens will be aerated in the same manner next week with a smaller diameter tyne and reduced depth of about 8 inches.
Hopefully we have seen the end of the rain and the courses get a chance to dry out a little bit which they badly need.  We have had nearly 6 inches (150mm) of rain in the past 13 days with some rainfall recorded on every day.  But we should count our blessings when you hear that Cairns Golf Club has had 3 and a half metres of rain and a cyclone since October and it is still falling out of the sky up there.
Posted by Peter Lonergan at 10:53 AM No comments:

Well I guess it wouldn't be a golf course blog if the US Masters didn't get a mention.  Even though I am much more excited about spending 3 days at Barnbougle and The Lost Farm down in Tassie this week.  Let's hope the weather holds.....and my body!!
But it is in Augusta Georgia that all the golfing world concentrates at this time of year.  A couple of really interesting links below with the excellent flyover in the first one that can actually give some appreciation of the contour changes on the course which always amazes first time visitors.  It also give you a peek at the admission prices!!  The other astonishing thing is the number of trees that have been planted when you compare it to the old photo of the course below.  At least they have been wise and not planted too many trees close to greens.
http://sports.espn.go.com/golf/masters11/news/story?id=6289311

This link gives a fascinating look at the changes and the reasons behind them over the years.
﻿
http://www.golfdigest.com/golf-courses/georgia/augusta-changes


And if you want to play in The Masters then these are the qualifying criteria;