Well at least the volume of rain falling has decreased although it is still coming down with 561mm (22+ inches) of rain since February 1 and rain recorded on 50 out of 85 days following the driest January on record.  The courses are now taking a long time to dry out with the water table as high as it can just about be in non-flood times.  There is a wet patch on 6R fairway that is nowhere near any irrigation pipes and the water is coming out on the surface so is preumably groundwater.  The same thing has happened before on that fairway after a prolonged wet period and is an indication of just how wet it is.

One of the benefits of the rain is the flushing effect it can have on the soil structure, particularly on the greens.  I have mentioned previously that the irrigation water supplied to us is our lifeblood but it does have high sodium and chloride levels which do build up after time.  A soil test was taken on February 1 before the rains , then again on March 14 prior to the really high falls and again April 1.  The total soluble salts on 18R green were at a high of 1544ppm on Feb1 then dropped to 535ppm in March and then 267ppm in April which has had an obviously dramatic effect on turfgrass health.

Elsewhere on the courses the turfgrass is starting to slow down as we head towards winter.  Mowing heights have been lifted on tees and fairways and frequency of mowing operations is also reducing.  Divots on fairways (and greens) will become prominent now with slow recovery so more sand will be visible on the fairways.  That is as long as people use their sand buckets which is sometimes a challenge as the photos below show from the past 2 weeks.  Generally it is not worth replacing the divot unless it is very deep and long and even then some sand over the top helps to return to a level surface.


And when you do sand your divots it would help if the sand was levelled out by first of all not over filling the divot and then standing on the sand to smooth it out, unlike this effort below. 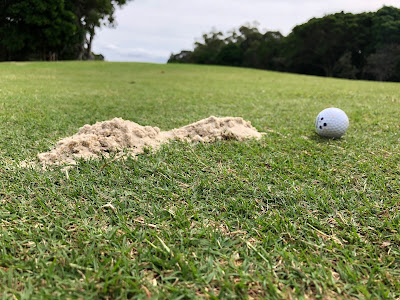 And then there was this one that was well sanded but unfortunately it was on 5W green during todays members competition!!

And from the history books this week is a shot from the early 80's with work being done on 9R green.  The old course maintenance shed can be seen in the background where the current TifEagle practice green sits.  And yes that trailer on the left is still in use today!!

Posted by Peter Lonergan at 5:12 PM No comments:

Not really the Friday finish that we wanted for the junior girls amateur but you can't control the weather and have to work with it as best you can which the crew did really well today pushing water off greens to make them playable until the heavens really opened up.  28mm of rain got dumped on the courses in around an hour but as I have mentioned many times before the construction of the River greens and bunkers meant that they became fully playable again within 20 minutes of the rain stopping.  The players returned to the course and completed their 3rd round and with no time for the final round the tournament was shortened to 54 holes.  Maybe I jinxed the tournament by buying an extra 3 squeegees which is what we use to push the water off the greens.  The lead up to and the week itself was a great buzz for the crew with a lot of overtime and effort put in.  I couldn't have been happier with the way the course played and it just shows what sort of turf quality we can produce with enough mowers and manpower.  Thanks again to Toro for the loan of the extra 2 fairway mowers that helped make the course look so good.  The West course also got a bit more attention after the girls had started and also looked great until the rain.

The only dampener on the week for us was the way the players treated the course.  They all carried a sand bucket from what I could see but they were hardly used.  Fortunately there is still enough growth to get recovery but I get really annoyed when the club opens its doors to these so called elite players to have this sort of golfing etiquette shown.  Rant over!!  Having said that there was some incredible golf played with a 15 year old 10 under at one stage of her first round and finished 8 under.  That was backed up in round 2 with a 5 under 68 from a 14 year old New Zealander.  Incredible talent on show.

The nights are getting much cooler and the daylight hours are reducing rapidly so mowing heights on some of our shaded tees will lift next week and if the weather cooperates we will get the tees fertilised next week as well.
Posted by Peter Lonergan at 5:41 PM No comments:

397mm or just under 16 inches since March 1 which includes 174mm (just under 7 inches) in the past 10 days.  So yes it's wet and it has unfortunately not helped with course preparations for the junior girls tournament next week.  I don't recall seeing the fairways stay as wet as they have this week.  Unlike last week when virtually all fairways got mown we were unable to mow much of the West course and couldn't get near 1 and 9 on the River.  Hopefully the weather improves for next week.

Having the 2 loan fairway mowers certainly makes a difference with the fairways that can be mown coming up very well.  A bit dis-heartening when some hacker takes a divot within an hour of mowing and shows no respect to his following players though.

A distinct change in the weather this week apart from the rain with morning temperatures in the workshop compound dipping below 20° for the first time since early November which is three weeks earlier than last year so it will be interesting if there is any distinct difference between winter this year and 2018?
Posted by Peter Lonergan at 5:19 PM No comments: