I was talking to a fellow Superintendent this week and we were discussing the value of experience on the course staff and I started to consider our Cool Tweed crew.  Sunday will mark my 21st anniversary with the Club and there are still four crew who were here at the start and over the years there has been 128 staff members come and go and stay.  The current crew have a combined total of 230 years on the courses and that includes the two apprentices who have just five between them so there's lots of experience out there.

Back to the courses and we were able to complete the spraying of the tree bases this week and were also able to fertilise all River course fairways.  The West greens were aerated with solid tines which helps get some much needed air into the soil profile without disturbing the playing surface too much.  It's been hard to get it done over the past few months with the amount of play we are getting and we quite often do it on a rainy day when there is no play on the courses.  Below is a photo of one of the actual tines used this week compared to a new one on the left.  The tines start off at 140mm long and a diameter of 6.3mm and after aerating half the West greens the tine had lost 10mm off its length.  There are twenty four tines on each machine and we look to get 80mm depth with 333 holes per square metre.  So that means we ''punched'' 3,996,000 holes on the greens this week!!


The new Club website is now active and to access the ''course conditions'' where motorised buggy status is published you just need to press the ''cloud'' icon on the RHS of the home page.  You don't need to be signed in to do this and this area also includes a link to this blog.

Pretty much getting sick of rainbows at the moment with the constant sun showers really becoming annoying and also keeping us wet.  There are a lot of areas on both courses that are being badly cut up by motorised buggy traffic and I would ask drivers to watch where they are going and avoid the wet areas.  I saw an amazing photo of buggy traffic on a course in the USA where they have a tracking system fitted to their buggies so that they can monitor exactly where they have been driven around the course.  The photo below shows the traffic from all 121 buggies that were driven around this course in just one day which is quite an extraordinary graphic and I am sure we would probably look worse than this given current traffic levels we are experiencing.  The yellow lines are all traffic and then the blue one is just one highlighted.  At least the greens and waterways were spared!!

Out on the courses all West fairways were fertilised this week so at least the rain did some good there and we started the exhaustive process of spraying around the bases of the trees to clean up the weeds.  We also had another couple of irrigation issues requiring some repair but the major irrigation issue this week is in the pump shed once again with a leak on a flange on the outlet to the courses.  A new flange needs to be fabricated which will take a couple of days before we can fit it which will require a total shutdown of the system.  The photo below shows the culprit with the rust only showing on the non-visible side of the pipe.


Posted by Peter Lonergan at 4:53 PM No comments:

Thanks for the couple of comments and private emails regarding the removal of the ball from the putting cup both during and post Covid.  Since the change of the rule to allow players to putt with the flag in I have been amazed at the number who do and I would say it is the majority.  Last year when we held the junior girls tournament the vast majority of the girls left the flag in.  The resulltant damage to the cup from hands, clubs and suction cups on putters has seemed to be getting worse every day.  It has led to cries from Superintendents the world over for the rule to be changed back due to the damage.

Unfortunately, the apparatus shown last week is not available in a size that will fit our flagsticks which are 16mm against the 12mm size needed.  The rep has said they are looking at producing one but I doubt it will be ready for Covid.  I am still keen to have a look at it though to see if it can work for us.

As one of the comments mentioned last week the possibility of damage post Covid is also heightened if players do remove the flagstick and then aren't careful returning the flag to the cup and brush the side of the hole and cause damage.  A few clubs I know have tried attaching the apparatus below which is commonly used on practice greens but have found that the damage when being returned to the hole outweighs the advantages. 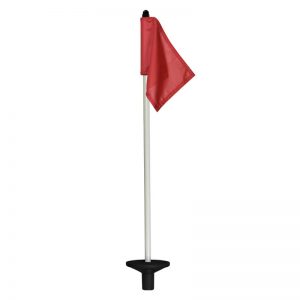 Back to Tweed and the change in the weather is most apparent.  Last Friday saw 18 degrees at 5.30am in the compound which seemed a lifetime ago to Wednesday's 6 degrees which certainly slowed growth right down.  The wind chill factor is also a factor for us but when you talk to some of the southern States we really aren't that cold.

The River greens were due for a fertilise this week to help with some leaf growth and colour but unfortunately it was too windy late in the week to get it done.  With the light shortening in the morning and the speed of the first groups it is getting tougher to get some of our work done in front of play.

It's the norm for us to have a staff BBQ breakfast at least once a month which has been missing since Covid but this week we finally had one which the boys all enjoyed very much.  Social distancing was well and truly adhered to and we ate in shifts so that there were no gatherings happening.  I did have to buy a few more pairs of tongs though!!  It's only a small reward for the staff's efforts in presenting the courses but one that is very much appreciated by all the crew.
Posted by Peter Lonergan at 5:00 PM No comments: