Well what a difference a few hours make!!  We are now at the highest flood level I have seen in my 18 years and hopefully the majority of the water on the courses is flood water rather than salt water.  There are now almost 20 trees uprooted around the courses which have all come down in the wind since 8am this morning and more branches falling continually.

A bit of a photo tour below and a couple of videos. 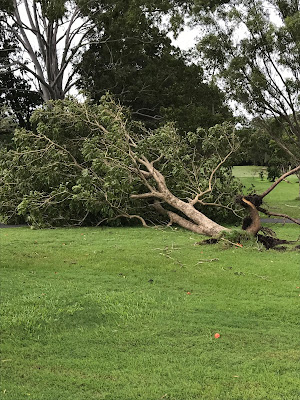 
A bit of an update on the current weather event @ 8am Friday morning.

We are basically in minor flood at the moment.  I have seen more water and debris on the courses but this would be top 5 since I have been here.  Remarkably at this stage there are only a couple of trees down on course but a large number of branches and small debris everywhere.

A couple of photos below of 1 and 9 River fairways and the path to 2 River tee showing debris from the River after inundation overnight.  And this is at low tide!!

Another week of some good rainfall amounting to about 90mm but gee hasn't it got the grass moving along with the mosquitoes!!  The fairways are under a growth regulator that generally last 4 weeks almost to the day but they have already kicked after just 3 weeks which shows just how ideal the growing conditions are and the roughs are out of control, particularly any Kikuyu areas.  Across the courses we are struggling to keep up with the grass growth but be assured we are doing our best.  The humid conditions are perfect for disease formation but the plant protectant programs in place have so far done exactly what they are required to do and that is prevent disease in conditions such as these.  When you see the proliferation of mushrooms popping up you know it is exceptionally hot and humid.


The new TifEagle greens got a fertilise and sanding earlier this week and I thought I would video the operation for publication on the Blog.  It may be the last sanding the greens get although the weather is still holding up quite well so there might be time for another.  The sand used is the same that they were constructed with and there is some gypsum and a mix of humates added which was also part of the construction mix which helps prevent building up of differing soil layers in the greens profile.


Posted by Peter Lonergan at 5:04 PM No comments:

A week interrupted by some much needed rainfall and fortunately we got what we needed rather than the soaking some courses further south received with Byron Bay receiving 250+ mm on Tuesday when we received a very timely  38mm which was followed another 20mm on Wednesday.  The courses certainly took it well after such a prolonged dry period and is just the tonic to finish off summer and set us up for the winter.

The new TifEagle greens are settling in very well and as with all new greens holding nutrients in them to maintain colour is a real juggling act.  I prefer to shy away from synthetic fertlisers when they are young and will be putting out a granular product on them next week.  The synthetics normally only last a week or so whereas the product I will use should give us 4 - 6 weeks.  It will co-incide with another sanding which may well be the last before the winter arrives.  It will also compliment the soil amendments that were added to the sand during construction where the goal was to put in a range of natural products to try and "create" a six year old profile rather than a brand new sand based profile.

I had a visit from a life time long Superintendent from Florida today and at his last course was growing TifEagle so it was great to get some first hand information from him.  He was pretty impressed with the surface for such young greens at Cool Tweed.  I will be holidaying in the USA this June and will be taking some time out to visit some courses in Naples and West Palm Beach in Florida where TifEagle is all the rage.  Three of the courses I am visiting have ex pat Aussie Superintendents as well!!  I also showed him a couple of the 328 River greens which bemused him as it hasn't been used on greens in the USA for many years.  "I gotta get a photo of me on a 328 green for my buddies" he beamed.

Hopefully the massive amounts of rain predicted over the week end don't eventuate and we get what the courses need rather than a wash out.
Posted by Peter Lonergan at 5:38 PM No comments:

Another week of pretty much routine maintenance with some cooler temperatures overnight making not only sleeping a lot more comfortable but also allowing soil temperatures to start cooling which is a godsend for the remaining bentgrass greens.  This time next year will be a different story when the warmer it stays the better for the next stage of the TifEagle conversion on the West course as the TifEagle thrives in the hot conditions.  The new greens are really coming in to their own at the moment and are improving every day.  I would like to get another heavy sanding in to help finally level the surface off but that will depend on the weather and golfing programme.

It was also a week of very high tides with water inundating some of the lower areas on 1R fairway and the short range leaving some burn evident on the common couchgrasses that are on these areas.  Over the years we have planted a salt resistant grass called "Seashore Paspalum" in these areas and as the photo shows it really is salt resistant!!  Many courses in SE Asia where they have poor quality water have used this grass and it is so versatile that it can be used throughout the course and mown at different heights including putting green height.  Quite amazing!!

And I was checking my photos from the construction this week for an article I have been asked to write and came across a video that I had forgotten about of 17W green.  It was taken on a day as windy as any of those this week and shows the flag on 17W green not even moving whilst the surrounding trees and 13W temporary flag are thrashing about.  Air movement across a putting green in particular is critical to assist cooling the surface so it's a good demonstration of one of the factors that caused 17W to fail as a bentgrass green.

Posted by Peter Lonergan at 5:46 PM No comments:

60 of the best millimetres of rain during the week you could wish to get.  Some was a little heavy but certainly no complaints here.  The courses were just about as dry as I have seen them in the near eighteen years I have been here.  The rain wasn't all that widespread so we may have been very lucky with what we got.  The small dam on the corner of 5W has been dry twice that I can remember and would have been dry this week without the rain.


A 328 nursery green was planted this week on the site of the old bentgrass nursery green so some more new turf to look forward to growing in.


Not really much else to report from this week as we were busy keeping the new turf on 12 and 14 west alive and tending to normal routine maintenance.  The rain and heat will really get the rough moving along so the rough mowers are primed and ready to go for next week

Posted by Peter Lonergan at 6:22 PM No comments: