Seems crazy to actually want some rain after the past two months but we are drying out in a few areas already.  Having a mainly sandy soil profile is helpful during rainfall but not so good under the intense heat we have had this week as we dry out so fast.

All River fairways and some selected tees were fertilised this week with a product that has a coating on the granule which allows the nutrients to release over an extended time rather than all up front.  Unfortunately the normal fertiliser of choice is temporarily unavailable so this is a substitute so will be interesting to see how it goes.  It would have been nice to get some rain on it but the fairway sprinklers will just have to do.

The West greens have recovered well from their renovation and will receive a top up sanding next Tuesday weather permitting.  The colour from the renovation fertiliser that got washed away isn't as patchy as what I thought it would be which was a relief.

We have had a great result from a recent weed control application on the tees with the weeds mostly being encroaching Kikuyu and Blue Couch.  Time and weather have been against us for a while so the result is very satisfying and a follow up will occur next week.

And last week the Tweed Shire Council's ''mozzie control plane'' was at work flying over Ukerebagh Reserve which is the land directly adjacent to 5R.  I got a video but can't seem to upload it for some reason so the photo below will have to do.  It was literally flying amongst the treetops which must take some skill and nerve.  Didn't seem to be as many mosquitos around this week so it may have done the job.

Posted by Peter Lonergan at 5:01 PM No comments:

Well the forecast rain was unfortunately right and we had a very interrupted renovation of the West greens.  We got a great start on Sunday afternoon in very hot and dry conditions but Monday and Tuesday were a different story.  Due to the rain we were unable to hollow tine the greens which is when you remove a core which was one of the main goals of the operation.  Even though the greens are very young the opportunity to remove some organic matter by coring doesn't come around very often on such a busy course so that was disappointing.  So we could only solid tine them with a 9mm diameter tine which at least allows them to breathe as well as a 4 direction scarify.

The torrential rain on Tuesday night didn't help much as it washed away quite a bit of sand and fertiliser meaning the evenness of those two operations was compromised.  The greens need some more sand but the sand plant hasn't been able to mix our amendments in due to the rain so they will need to wait till late next week with the public holiday on Tuesday.

1 River green is progressing very slowly which is hard to explain given the perfect growing conditions of late.  The constant surface moisture from the rain in December allowed a film of algae to form which we finally got to spray and it was then literally scraped off once it had dried out and the green was heavily sanded this week.

About the only thing that did go right this week was that the weather cleared for just enough time on Monday for us to get the growth regulator applied to the fairways which given the growing conditions and moisture levels was a good thing.  I have been asked before why the rough doesn't get sprayed with growth regulator and its because of the ''shielding'' effect the longer grass has by not allowing the spray to contact all the leaves which is needed.

Posted by Peter Lonergan at 5:17 PM No comments:

One piece of data that I did miss in the 2020 rainfall summation was that December was the wettest ever which made it two months in 2020 creating a record with February also the wettest on record.  The previous wettest December was in 1955 when 488mm was recorded compared to 2020's total of 558mm and February's 953mm eclipsed the previous wettest which was in 1956 with 897mm.  It must have been a heck of a time on the Tweed from 1954 thru 1956 with two of the biggest floods on record affecting the area in those years and they were only eclipsed by the 2017 flood.

We got the greens collars on the West course renovated this week which is a great head start for next weeks greens renovation.  Here's hoping the forecast rain for Monday and Tuesday is wrong as dry conditions are highly desirable. The collars were scarified and cored then mown low to ''scalp'' the turf which helps prevent the formation of an ''edge or well'' effect on the perimeter of the green.  By doing the collars early we lessen the risk of contamination from the collar turf getting into the greens as well.

I wonder what this Tawny Frog Mouth Owl had in its sights this morning as it looked set to pounce whilst perched on the NTP post at 15W but maybe it was just resting after a big night feasting on the plethora of insects available.

Posted by Peter Lonergan at 5:05 PM No comments:

Well the bureau had been predicting rain all week and it finally arrived today, albeit a day after it was supposed to get here.  Dare I say it, but the courses were drying out again after December's torrent of rain and what we have had this week has been reasonably good soaking rain which is just what we want.  A very nice 30mm for the week.

We were able to get some de-thatching done on the West greens and the actual putting surface is excellent and it was nice to hear the same comment from a few of the Vets on Thursday and some other players as well.  What we did miss was an application of fertiliser to even the greens colour up a little.  The heavy rains had all but leached out the available nutrient in the greens leaving them a little blotchy in places.  The same thing used to happen to the River greens when they were new and is caused by the free draining nature of the soil profile.  The greens are due to be renovated on Monday and Tuesday January 18 and 19 following the postponement late last year.  The greens will be scarified to remove thatch then hollow tine aerated so a core will be removed to help further reduce thatch.  We don't need to go very deep due to the greens age and it will be an 8mm size hole.  Some soil amendments will be added and the greens sanded.  The West course greens collars will be done next week as we don't have enough time to get them done within the allocated two days.

The threat of some bad weather reduced the fields on Thursday and Friday and we were able to get all the main playing surfaces double cut over those days.  Such a difference when we can get a good run at the courses with no hold ups waiting for players. Very disappointing to have the Twin Towns Open cancelled as the courses are in great shape and ready to challenge.

Posted by Peter Lonergan at 5:26 PM No comments:

We finished the year with 2,735mm of rain which made it the third wettest behind 1999 with 2875mm and 1906 with 3,193mm.  It was certainly a year of contrasts though with extreme dry at the start of January and extreme wet in February again turning to extreme dry by November and then finishing off again with extreme wet in December.  The rainfall chart below tells the story of the year. 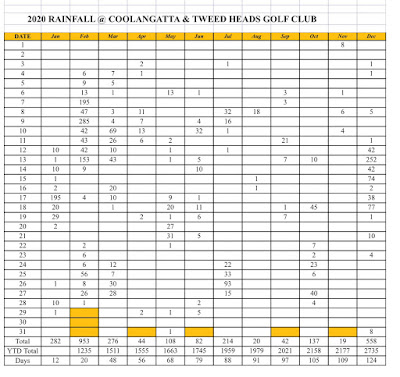 I was contemplating doing a "year that was" montage but then realised that the year was dominated by the weather events and of course Covid19.  Weather is certainly a dominant topic for the course at Cool Tweed and 2020 provided it all....and then some.

Perhaps in future when the seagulls congregate in numbers on 4W we know we are in for some rain.

But in amongst all the wet we also had some dry.  It gets to a point where many 'non play' areas have the irrigation turned off to conserve water and this was the result on 15W below prior to the rains in December.

And don't be alarmed as it has all happened before and will happen again.

And it doesn't seem to matter what time of year we get the rain as in 2020 it was February and December and in 1996 it was May.

But no doubt the story of 2020 was Covid19 and its impact on society and the game of golf.  Golf has seen a boom in player numbers around the world with unprecedented numbers joining clubs and playing, many for the first time.  We have certainly seen a huge increase in play and it doesn't seem as though it is going to wane anytime soon.  Who knows what 2021 and beyond holds in store for us but below is an image I would like to forget.  Oh and if you have a pool use blue noodles as they don't fade as much as the pink ones do!! 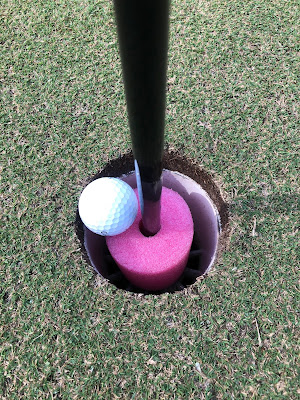 Happy New Year and good golfing to all....

Posted by Peter Lonergan at 3:43 PM No comments: