A very teasing week with 18mm of rain falling that included a very nice fall of 12mm on Monday night.  It was really just annoying and adds to the humidity and the pressure on the West course bentgrass greens.  At this stage they are still holding well but there is still some heat and humidity to come so mowing heights will stay up to help them survive the rest of summer.

The River course greens were de-thatched and sanded this week.  The de-thatching helps remove thatch as the name implies and the units we use also remove a lot of dead leaf material from the surface as well.  They are effectively slicing blades spaced at 10mm and for this regular type of operation are set level with the surface and the weight of the unit makes it just contact the grass.  The machines go up and back on the same line to ensure consistency.  It is not a major surface disruption but is labour intensive to try and ensure we finish in front of play.  The greens were then sanded to assist in levelling the surface and they are putting quite nicely at the moment.

A calm week wind wise allowed a lot of weed control to take place.  Foreign couchgrass in most of the West greens has been sprayed and a green dye is used to help identify the areas sprayed.  Spraying has also taken place on greens surrounds on both courses and selected fairways and these areas will burn off to a brown color then green up gradually over the coming weeks.  Other fairways were spot sprayed using knapsacks.

A very hot week has just passed with the rain so close but just never eventuating.  On Monday morning the radar looked very promising with good size falls in Brisbane and heading south.  The fertiliser spreaders were readied and loaded and out they went.  Unfortunately the rain didn't make it past Southport so I had to rely on irrigation to water it in.

Speaking of irrigation, the courses are irrigated with treated effluent water from Tweed Shire Councils Banora Point treatment plant in Greenway Drive over past Bunnings and 1.4 megalitres are being pumped down daily and then pumped out on the courses each night.  We are very fortunate to have such a high quality water with the Council having just spent $35 million on an upgrade of the plant.  This link has some more information about the plant; http://www.tweed.nsw.gov.au/Item/269  When you hear of some south east Queensland courses having to truck water in to water greens only we are indeed very fortunate.

And it must be hot because it generally needs to be to catch a glimpse of the Lace Monitors (aka Goannas) that inhabit the course.  The one below looks like the baby of the 2 metre one that rushed past me near 13 River tee and scared the heavens out of me before it scampered up a tree!
And the heat and humidity of the past weeks and what will be coming in the near future certainly puts a strain on the West Course greens.  The greens are bentgrass and it is known as a cool season variety which means it is very out of place in a sub tropical climate and at this time of year goes under quite a deal of stress and a lot of its problems are accentuated.  Particularly the foreign grass invasion and particularly the foreign couchgrass.  This is not a new problem and below are some excerpts from CTH Board minutes from as long ago as 1980 which also include discussions about replacing the greens.  There is only one product registered to control the invading couchgrass and I use that quite extensively however it is unable to fully control all the different varieties so it really just acts as a suppressant for us.  Hand weeding is carried out continually in an effort to pull the runners but with the resources available I just can't keep up.  The blue and mullumbimby couch and carpetgrass that also invade are either hand weeded or spot sprayed.  The product that is available to control these pests can have quite a detrimental effect on the bentgrass particularly at this time of year when they are under so much climatic stress.  One needs to tread very carefully with application of any products to the greens including water and fertiliser.  Some of the long term members will well remember the annual problems that occurred with the greens  and it was not uncommon for there to be several temporary greens each summer and large areas of extensive turf loss.  That was before my time I might say!  The bentgrass greens do take a lot of work but when the weather cools they provide an excellent putting surface. 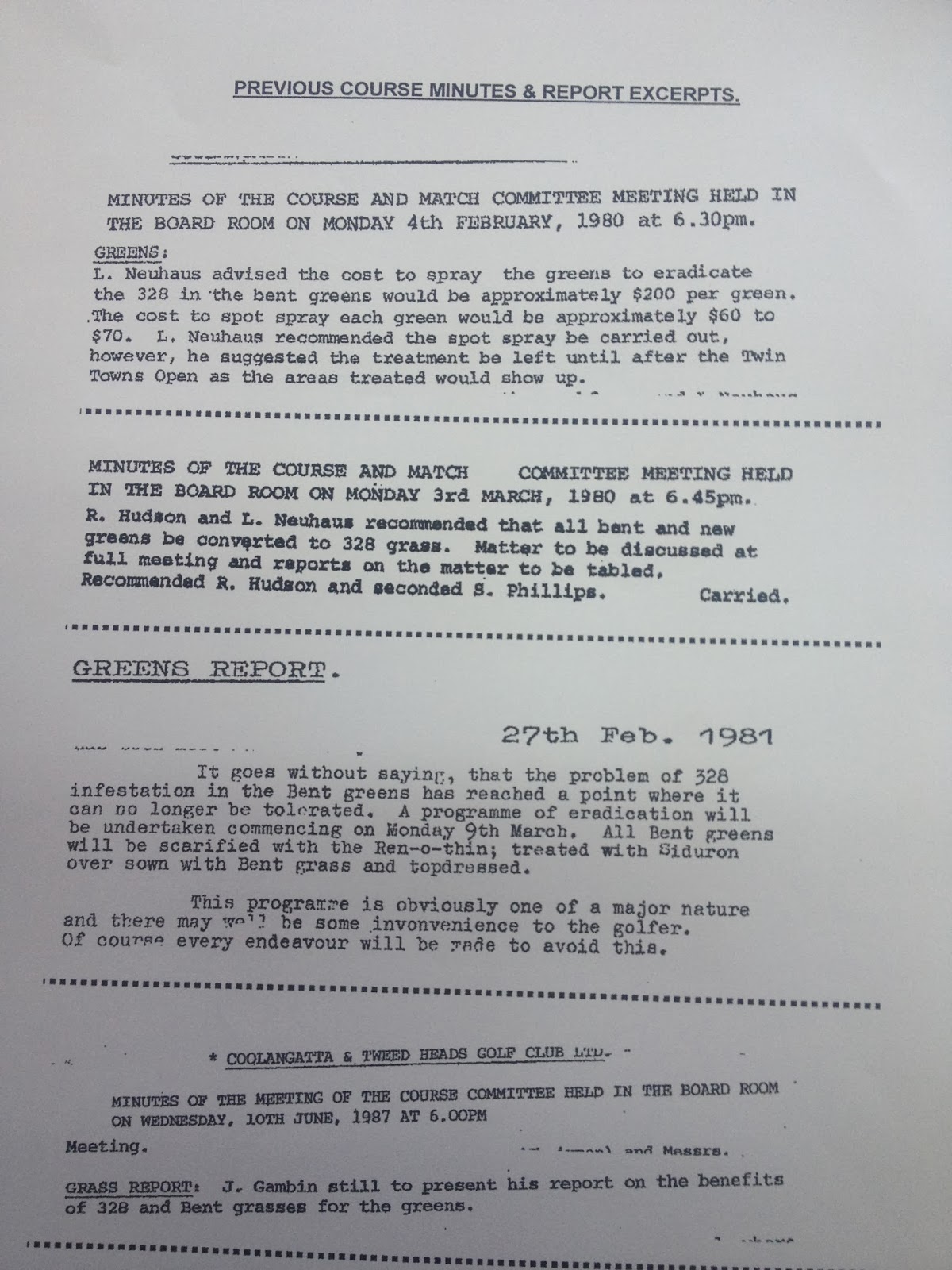 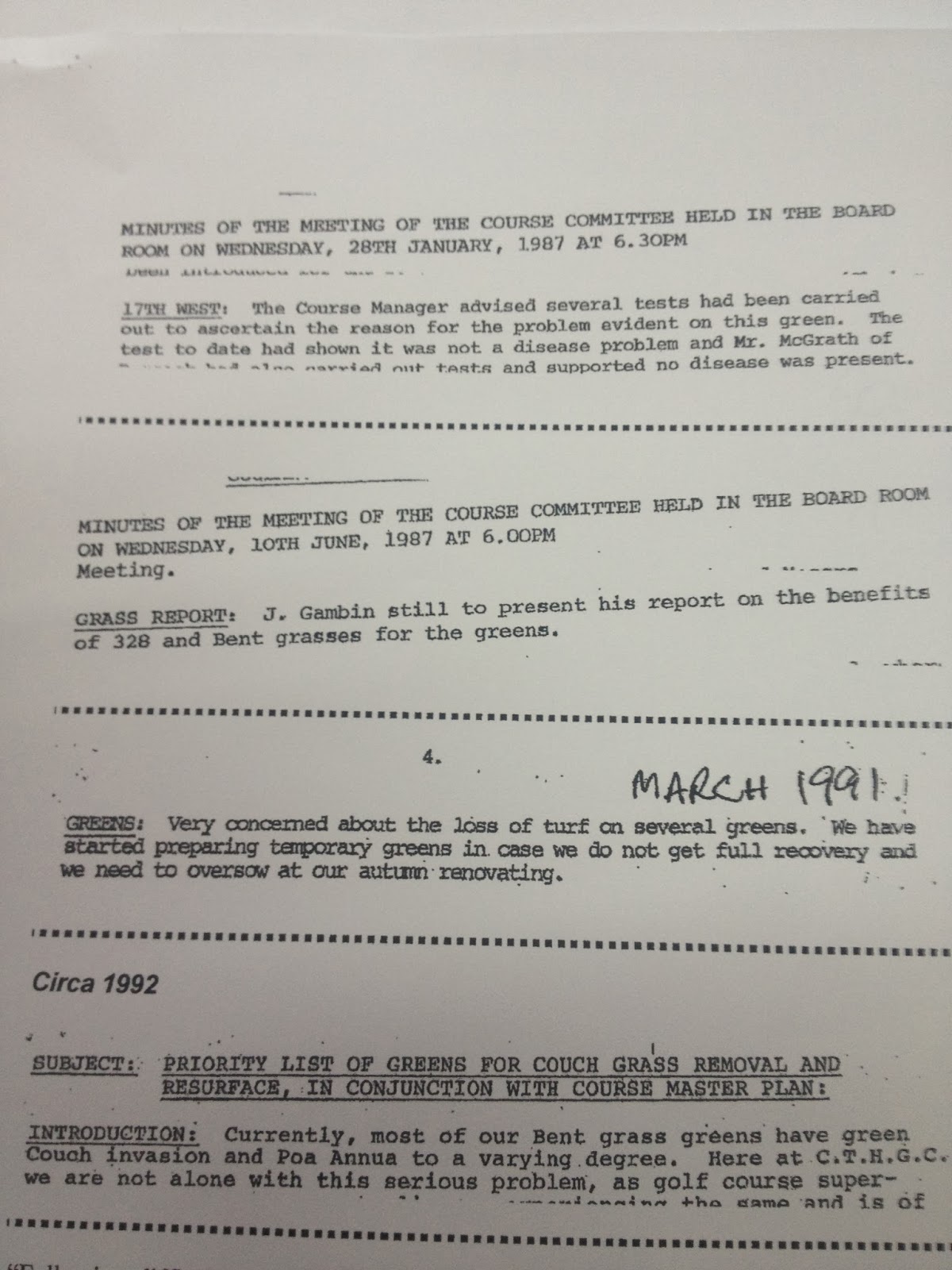 Posted by Peter Lonergan at 5:34 PM No comments:

A very busy week just gone with tees on both courses being renovated.  As posted last week they haven't been done for two years and needed it desperately.  The process consisted of a deep scarify, hollow tyne with 16mm diameter holes and then the resultant cores rubbed back in to the surface which effectively topdresses and fertilises them.  It is a very labour intensive operation as the scarifying takes quite a bit of time and the resultant material needs to be removed.  As you can see in the photo below about 4 cubic metres of material was removed from 6 tee West alone.  The cores then have to be dry to be rubbed back in and then cleaned off.  A final mow finishes the task.  Full recovery should be about 3 weeks but the playing surface is fine as is.


There are lots of problems that can arise including all the markers and sprinklers being hit by the machines but by indicating their locations you can avoid any nasty surprises.  However it's the hidden problems that can cause some worries such as tree roots and with so many tree adjacent to tees they are full of roots and most are quite near the surface.  The photo below shows where the aerating machine punched through a root and took out a core which obviously blocks the core and doesn't do much for the machine either.

I didn't get a chance to photograph the scarifiers in operation but they are a pedestrian version with a 400mm (16 inch) cutting width.  We have 2 of the machines and they are a "Graden GS04" model and are Australian made.  They were developed by an engineering company in Melbourne called Graden Engineering which takes its name from founder Graham Dryden.  Graham was repairing a local councils machine and commented that he could make a better one and so he did.  The machine has been so successful that many Superintendents in America actually now say they are going to "Graden the greens" instead of scarifying.
Posted by Peter Lonergan at 4:39 PM No comments:

The BLOG is back

Well after a twelve month hiatus the BLOG IS BACK!!  Thank you to those members who have asked about the whereabouts of the blog and for your interest in it and I am glad to be able to once again provide you with an insight in to what we do on the course maintenance team.
Well nothing much has really changed over the twelve months on the courses with the following selection for your viewing.........

Divots out of greens....

Pitchmarks on 2 West green from the above practice.....

Bunker machine breaks down IN the bunker.....

Wild weather for a change.....

But some good things did happen.....

And on a personal note I finally got to see St Andrews.....

As I perused my photos of the past twelve months I realised that I don't take many photos of the good things that happen or the good results that are achieved on the courses but my crew have been heartened by the many complimentary comments about the playing conditions over the past year.

But moving forward the next few months will see a flurry of work on the courses to get them ready for winter.  All tees on both courses will be renovated which will include a heavy scarify followed by a hollow tyne and fertilise.  The tees haven't been renovated for 2 years and desperately need it.  Selected fairways will be fertilised to ensure a good cover of grass entering winter as will many of the shaded weaker turf areas.

Unless something extraordinary happens I aim to post weekly which will generally be on a Friday afternoon / evening.  If there is anything you would like me to explain for you or you have a burning question that needs answering then please add a comment to the blog or email me at the address that is on the club website under "about us / corporate".

﻿
Posted by Peter Lonergan at 6:53 PM No comments: