160mm of rain last week end which was just about exactly what the bureau forecast and although badly needed with no irrigation system available it certainly put a dampener on the golf.  Some absolutely torrential rain came down on Saturday morning and the pool noodles in the putting cups did what they are supposed to do in a swimming pool and started to float. The torrent of rain was too much for the greens drainage to handle but the greens are designed so that the water can run off in times of such heavy rain.  Five minutes after the rain eased back to showers we were putting again.The photos below show 4W green during and after the rainfall and 15W green during from the safety of half way West.

About the only thing the bureau did miss last week end was this front that rolled through on Sunday evening and although only lasting a few minutes, it certainly packed a punch with very gusty winds and another torrential dump of rain.

And finally late on Thursday we finally got the pump station pumping again following the successful replacement of some of the pipework.  It was a very awkward situation to work in as each of the three pieces had to be installed in a confined space and due to the nature of the pipes, each had to be precisely fabricated to fit.  Unfortunately it wasn't possible to ''buy off the shelf'' as explained last week and the photo below shows the three new pieces under the arrows and the tightness of the work area.  It was a great effort by Assistant Simon, Irrigation Tech Dave and Machinery Tech Craig to get the job done.


Posted by Peter Lonergan at 5:31 PM No comments:

The pump station is still causing some grief after further pipework problems were discovered last week while undertaking some repairs with another section of pipe needing to be fabricated to replace a faulty fitting.  As all pump stations are different there are generally few spares available as the pump set is individually assembled to suit the layout of the shed area.  So for the past two weeks we have had no capacity to pump water on to the courses.  Fortunately it is winter, although with the recent spell of mid 20 degree days you wouldn't know it.  So we are irrigating greens and some tees by hand with a water cart which is a slow but obviously necessary process.  Apologies to the players booked to play today but the overnight and early morning rain was definitely music to my ears.  The forecast looks promising as well but not so much for golf.


I have written before about some Poa annua (wintergrass) that has become resistant to the normal herbicides that we use to control it both pre and post seeding in several areas of the courses.  Poa is a great survivor and indeed is the primary turf type for many greens around the world including Pebble Beach and Oakmont in the USA.  But for many courses it is considered a weed and a lot of effort is put in to controlling it, particularly in greens.  For a warm season turf course such as ours it is better to control it as it dies out very quickly once it warms up due to its shallow root depth.  The resistant varieties started appearing on 5 and 6R and have now found there way to the Tifeagle practice green and 10R green.  Most of the products that are available to control Poa work quite slowly with some taking up to four weeks and can have the ability to damage the other turfgrass so a cautious approach is required in using alternative products.  It is not a local problem for us with resistance being experienced in Sydney and Melbourne in particular.


An interesting study out of the USA recently regarding foot traffic on golf greens.  It showed that the average foursome of golfers will leave each green with an average of 500 footsteps in the process of walking on to the green, putting out and then walking off the green.  So with the 100 foursomes booked on the courses tomorrow there will be 50,000 steps taken on the greens!
Posted by Peter Lonergan at 5:03 PM No comments:

An early one this week as I am on leave for the next 10 days.  Only 31mm of rain overnight but it was enough to put us back under water again in many places.  We have never really dried out with the lower temperatures and high water table so it was expected.  The rain during today seemed to be very localised to the courses as there was plenty of blue sky on the horizon on several occasions during the day.  I had to travel to Yatala to pick up some parts for the pump filter and coming back over Tugun hill in bright sunshine there was Cool Tweed under a grey rainy cloud.  You could barely make out Pinehust high rise.

The rain was certainly welcome on the greens though as the pumps have been down for much of the week with a four inch mainline needing repair at the rear of 12W green and then a flange gave way on the outlet side in the pump shed meaning we have no capacity to pump water for irrigation.  It's not easy to get some types of freight at the moment with the flight restrictions so we are still waiting on the replacement to arrive.

Posted by Peter Lonergan at 5:18 PM No comments: 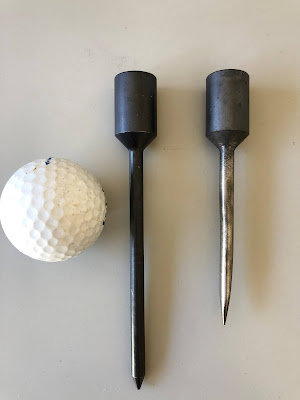 
Posted by Peter Lonergan at 5:26 PM No comments: