Not that much to report except rain!!  Coupled with the warmer temperatures we are having a late surge in growth and are struggling to keep up, particularly in the roughs.  Another 85mm this week with some very heavy downpours unfortunately undid all the good work that had been done in the bunkers two weeks ago.  It is pretty disheartening for the staff that spend their time fixing the washouts then having to do it all over again.  The 85mm takes us to a total of 312mm for the month of March which is 12.5 inches in the old scale.  The courses were very slow to dry this week even with quite low tides and a couple of blocked drains didn't help.  There were no blocked drains on 1R though and the photo below was taken on Thursday evening and that indicates just how high the water table is and how wet the courses are.  Not quite as wet as two years ago on March 31, 2017 though when the remnants of Cyclone Debbie descended upon us in the other photo below.

Most of the fairways got cut today which was a great effort in the conditions and our primary equipment supplier Toro has loaned us 2 x fairway mowers so we can increase the frequency of mowing in the lead up to the junior girls tournament in a fortnight.

Unfortunately the heavy rain virtually washed the sand away that had been applied to the River greens as part of the recent mini renovation on them.  The sand is critical in assisting the levelling of the surface of the greens and diluting the thatch layer.  At this stage I doubt we will get anymore out prior to the girls tournament and after grinding all our greensmower mowing units this week I don't really want the sand dulling the blades.
Posted by Peter Lonergan at 4:56 PM No comments:

Well I certainly got my wish granted for the rain last week with exactly 200mm or 8 inches in the old scale falling over four days.  56mm tipped out of the gauge on Saturday morning followed by 83mm on Sunday then falls of 24mm and 37 mm on Monday and Tuesday.  To say we and the surrounding areas needed it was a huge understatement and we are now full to the brim with the water table right up combined with the high tides.
The bunkers wore the brunt of the damage and have now been restored to their former glory.  A little bit of sand replacement will be required which will take place over the coming weeks.
With the cloudy wet weather early in the week the small renovation on the River greens was scaled back as it is quite late to be doing the greens and an eye has to be kept on attaining and maintaining a fully grassed surface heading towards winter.  The greens will have a couple of sandings in the lead up to the junior girls event in early April.
The combination of the moisture and heat really has the grass growing at the moment so it is all hands on deck operating virtually every mower we have.  The bunker restoration works took up a lot of labour time this week so now that is all but finished we can get back to focusing on the grass.


Posted by Peter Lonergan at 5:06 PM No comments:

The weather and lack of rain still dominates the thoughts of Superintendents around Australia with many courses either out of water and buying town water for their greens or very close to being out of water.  As I have mentioned before the 1.2 megalitres that we can pump every day isn't enough but I would hate to think what we would look like without it.  I don't think I have ever seen so many storms produce such little rainfall.  A few screenshots of this weeks radars with the last one tonight so hopefully we will get something worthwhile from this.

Surely we will get something out of this tonight.  Having said that the courses have responded really well to the recent fertilising and are growing very well and playing great as well.  The West fairways had 2 tonne of fertiliser applied to them this week so hopefully some rain will arrive to really kick them on as well.

A small renovation will take place on the River greens early next week to get them prepared for the junior girls amateur in early April.  We will have to tread carefully as the weather can change at this time of year and get a bit cooler on us so just what will be done won't fully be decided until we actually start on Sunday afternoon.  There won't be any coring but there will be some de-thatching and sanding for certain.

And it wouldn't be Players week without passing a comment with respect to the levels they go to with the presentation of the golf course.  I don't know just how many volunteers they have there this year but the roughs are being mown with walk behind rotary mowers just like an old Victa.  The course is oversown this year and really looks like Augusta which is a shame because it is a tremendous course that doesn't need to be spruced up the way it has been and made to play soft.  But it should still provide some great golf and I look forward to watching it.  Even the TifEagle greens have been oversown which is also a shame.  I am pretty sure that Pete Dye the original designer only ever built 2 island greens in his career but he is always remembered for 17 at Sawgrass!!

Posted by Peter Lonergan at 5:20 PM No comments:

A windy end to the week and still no real rainfall in sight and we unfortunately just missed some big falls on Thursday night.  The calmer overnight conditions this week helped the effectiveness of the irrigation system which was important as 4 tonne of fertiliser was spread on the River fairways early in the week.  It is a custom blend fertiliser that is used with an NPK ratio of 19:10:16 with 50% of the Nitrogen as slow release which means that we should have release for up to 10 weeks which will take us in to winter in good shape.  The actual release curve of the fertiliser is somewhat affected by motorised buggies driving on the fertiliser and breaking down some of the coating on the individual granules so the release can be altered by this.  The blend is quite high in Phosphorous which is due to previous outstanding results of applications to the courses.  The River fairways were all mown on Monday prior to the fertiliser going out and haven't been mown again this week to allow the fertiliser the best chance to reach the profile intact. The West fairways will be done next week weather permitting.

Also next week we will be re-modelling the front bunker at 17R green.  Many years ago a grass face was tried and then abandoned and the bunker has self formed in to what it is today.  The works will include confirming the drainage is operational and then the bunker will be re-cut out of the existing area.  It will not be any larger or deeper than it is currently.  The work will be conducted primarily on Monday and the hole will be closed to play all day to ensure safety of contractors and staff.  And no the bunker won't finish up looking like this one that was in play in the 1934 Open at Royal St George's GC which utilised 3 types of revetment - railway sleepers, grass and sod stack.  It didn't hold old Alfred back too much though as he shot rounds of 71, 70, 75 and 74 to finish 3rd to the great Henry Cotton. 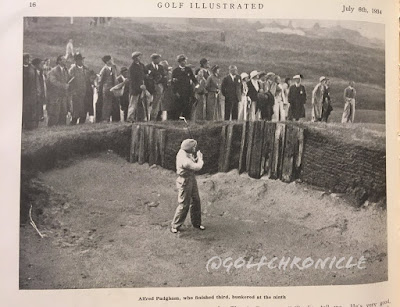 Posted by Peter Lonergan at 3:16 PM No comments:

So much for the 100mm + of rain that was supposed to accompany former cyclone Oma last week with just a few mm falling during the week.  We are still very dry and need some good rains while it's still warm to prepare us as we head towards winter.  It's looked like rain all week but only low single digit falls have been recorded.  Rain was recorded on 18 days in February but only totalled 88mm with one fall of 34 included in that.

Those of you who play Saturday to Saturday will barely recognise the courses with all storm damage cleared and playing surfaces restored.  The staff has done a great job getting the courses back as per usual.  We lost around 20 trees all up in the wind.

In April the Club is hosting the Australian Girls Amateur Championship and to start preparations Golf Australia Championships Director Trevor Herden toured the River course last Wednesday to look for areas where he could lengthen the course with several tees going back to the blue plates.  Trevor mentioned that the outer handicap limit will be 5 and with a place in the open field up for grabs there will be a good international field. Trevor was last at Cool Tweed in 1998 for the PGA players school and was impressed with what he saw this week compared to back then which was a nice reward for the work undertaken over the years.  We don't really go out of our way with course preparations for events as we are such a busy golf course with continual club events being played and a small staff but this will be an exception with a concerted effort put towards the week of golf.  It started with the tees being fertlised this week and the fairways getting done next week.  As we get closer mowing regimes will be heightened along with general grooming.  Let's hope the weather cooperates!!??
Posted by Peter Lonergan at 5:49 PM No comments: