And now spring is just days away although the way the weather has been I doubt you could say we have had winter.  The fairways in particular have held their color very well and although it is not warm enough for any really active growth we are just getting a little bit.  One of the good show points for this is 12R fairway where there are normally a sea of divots come the end of winter and this year there are not as many as in previous years.
A very busy week on the courses with nearly 90 tonne of sand being added to the West course bunkers this week.  This replaces the sand that is blown out by wind but moreso the sand that is displaced during play.  We do a process known as "backfacing" in the bunkers which involves manually dragging sand back down off the face of the bunker and back in to the floor of the bunker from the exit point where sand gets dragged to with the rake when it is used by players.  The sand added this week also makes access to the bunkers easier but probably won't help players get out any easier although it does make the bunkers more playable.  I have used the photo below previously to show just how much sand can be moved in the playing of a shot.  River course bunkers will be attended to later in September. 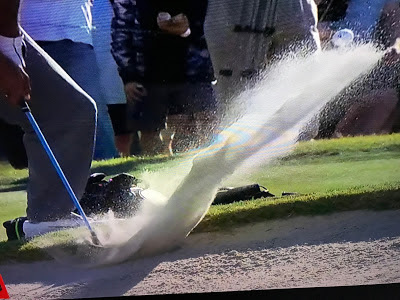 Posted by Peter Lonergan at 5:50 PM